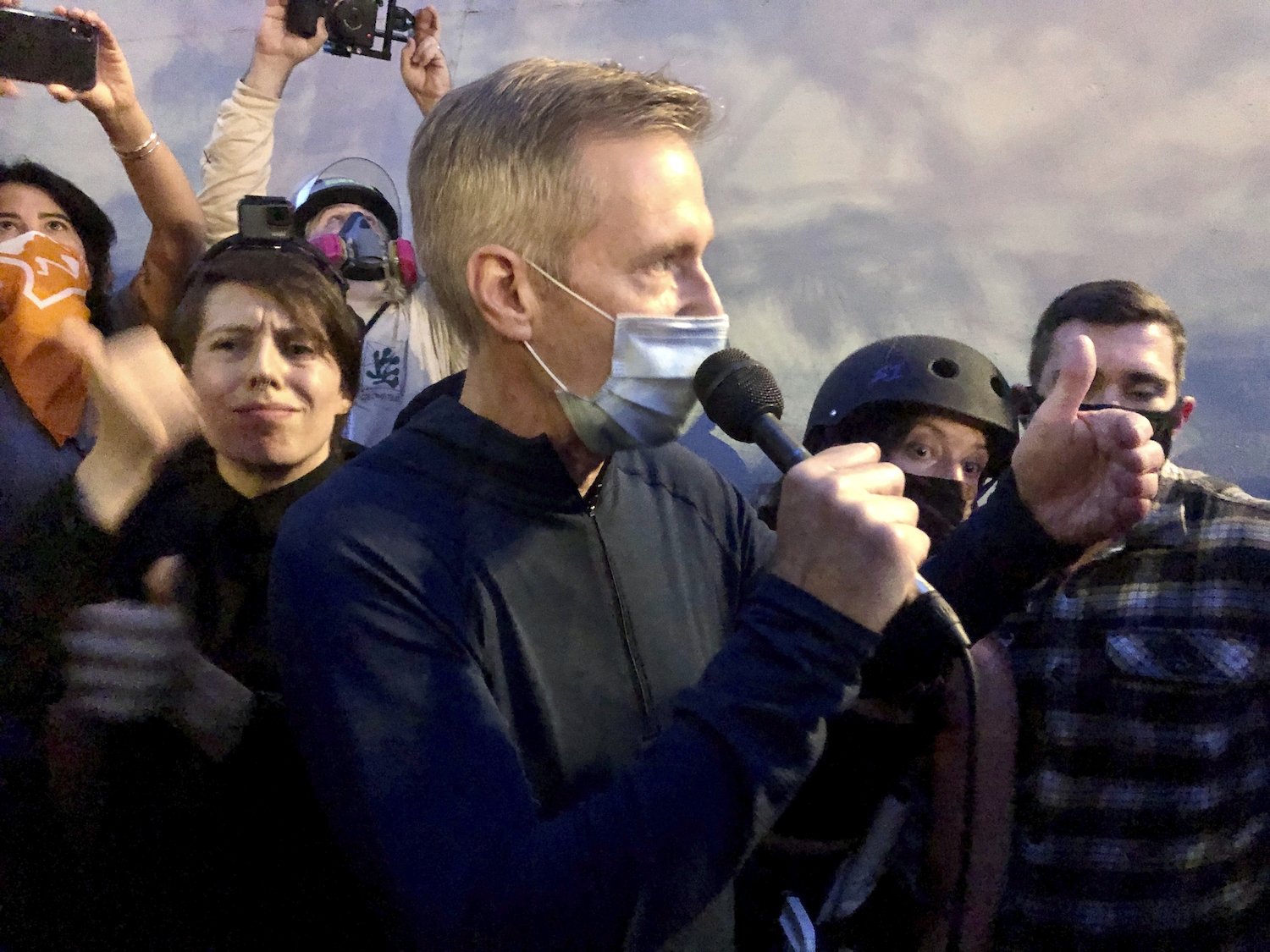 On May 19, during Portland’s mayoral primary election, no candidate was able to secure an absolute majority to win outright. As a result, on Nov. 3, Portland will be deciding the next mayor in a runoff election; On the ballot are the top two finishers, incumbent Mayor Ted Wheeler and challenger Sarah Iannarone.

Should he be elected a second time, Wheeler will be the first Portland mayor to serve more than one term in nearly two decades. He fell short of this accomplishment in the primary by just over 1,000 votes.

Challenging the incumbent is urban policy consultant Sarah Iannarone. Though she’s never held office, she previously ran for mayor in 2016.

Wheeler, the heir to an established Oregon timber company, comes from a conventional political background. Born and raised in Portland, he went on to receive an undergraduate degree from Stanford and master’s degrees from Columbia and Harvard University. He previously served as Oregon state treasurer, where he practiced aggressive fiscal management and environmental conscientiousness.

Iannarone, born in New York to working-class parents, has a less conventional background. After moving to Portland circa 1998, Iannarone graduated with an undergraduate degree from Portland State, and later began to pursue a Ph.D in urban studies and planning. She has previously been a restaurant owner in Southeast Portland, a community organizer and an administrator at PSU.

According to Open & Accountable Elections Portland, Iannarone managed to achieve more individual contributions, spread across the city—notably, more donations in residential neighborhoods. The same data illustrates that Wheeler acquired fewer individual contributors, but with more funds. Donations to Wheeler’s campaign came mostly from West Portland, and three-quarters of them reached amounts of at least 250 dollars.

This discrepancy in political platforms manifests in key areas, one of which is the respective proposals for managing the Portland Police Bureau and the role of police commissioner.

Portland City Commissioner Jo Ann Hardesty, a vocal critic of the PPB, has publicly requested that the mayor assign her the role of police commissioner. Wheeler has denied the request, choosing to retain himself as police commissioner and claiming a discussion may be had post-election. Sarah Iannarone has pledged to assign Hardesty to the role on day one.

“It is traditional for the mayor to appoint herself or himself as police commissioner because it’s a very high-profile role,” said PSU Senior Instructor Jack Miller. “It is interesting and noteworthy that Sarah Iannarone is pledging to assign that to a different member of the city council. That’s an acknowledgment that, one, she’s not into being the mayor who has as much power as possible.”

During the latest bureau reassignment, on Sept. 10, Mayor Wheeler did relinquish bureaus and agencies to commit himself to pandemic recovery; nonetheless, he continues to maintain a stacked, high-profile portfolio.

“Like a lot of mayors, Wheeler has assigned himself a lot of bureaus, including the most important and high-profile ones,” Miller said. “Iannarone, pledging to appoint Hardesty, she’s acknowledging that someone else is better suited to that role than she is. It’s unusual for a politician to want to give up a high-profile position of power but it’s an acknowledgment that it’s a very difficult thing to be right now.”

Wheeler’s adamance towards this mayoral tradition has cost him the endorsement of a key commissioner.

“This is a moment in history that requires strong and inclusive leadership, not more of the same status quo,” Hardesty stated on Oct. 29, in her endorsement of Sarah Iannarone. Hardesty originally gave a primary endorsement to Wheeler, then rescinded that endorsement in the wake of the Black Lives Matters protests and refrained from endorsing either candidate until now.

Giving Hardesty the role of police commissioner may be one of the most decisive actions either candidate has proposed to empower Portland’s Black communities, especially considering the fervent BLM protests.

“Iannarone—by promising to appoint Hardesty—is essentially saying, ‘Okay, I am going to make sure that somebody who is in charge of the police commission is paying attention to these non-white communities,’” Dr. Miller said. “The problem with our system of government is none of the city commissioners represent a community, they all represent the whole city. What that means is that it’s always been challenging for minority communities to go to the front-burner for any member of the city council.”

Though not relinquishing the PPB, Wheeler did forth proposals to alter the way police patrol minority communities, as well as economic proposals directed towards nonwhite-owned businesses.

Wheeler and Iannarone are both dedicated supporters of the need to commit to strong climate action. In June, the Portland City Council declared a climate emergency. The council passed a resolution that created goals the city would strive towards to meet the challenge of climate change, such as carbon emissions at 50% of what they were in the 1990s, net-zero carbon emissions by 2050 and free public transit for individuals under 18, among others.

Addressing the climate catastrophe may be one of Wheeler’s strongest appeals to progressive voters. As an economic moderate with progressive directives, Wheeler did produce consistent, albeit gradual, efforts to create a greener, more sustainable city.

“If this was a calmer time—if this election were being held last fall, instead of this fall—Wheeler could run for reelection on the fact that has been trying to advance a relatively progressive agenda,” Miller said. “He would also be running on the fact that he’s been trying to advance a sort of fiscally responsible, administratively efficient agenda.”

Iannarone takes a more aggressive stance regarding climate change. Her proposals include orienting the city towards net-zero emissions by 2030, establishing zero-emission zones—which would ban vehicles, like cars, from certain areas—as well as proposals geared towards wealth distribution, such as establishing a public-owned municipal bank and progressive taxation.

After a year that has seen a major global pandemic, historical protests against police brutality and an influx of voters that are ready to participate in democracy, this mayoral election will undoubtedly leave a lasting impression on the city’s history and future.