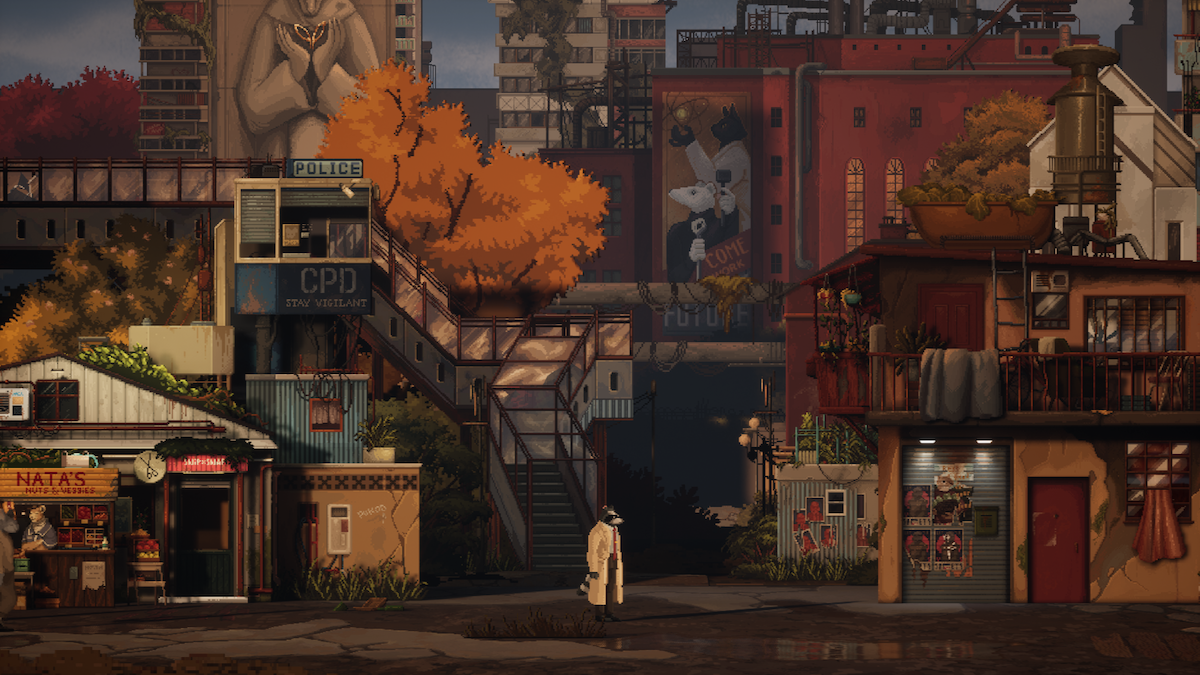 Good detective games are few and far between. The deductive process of interrogating witnesses, gathering evidence and piecing together clues to arrive at a climactic whodunit conclusion is hard to pack within the confines of a video game, so very few developers have taken their shot at making a detective game in the decades the medium has been around. The genre flourished during the 1990s, when point-and-click MS-DOS adventure games like The Secret of Monkey Island or Where in the World is Carmen Sandiego were churned out by studios like LucasArts and Sierra Entertainment. Since then, however, the interest in detective media has dwindled.

Backbone, the debut game from EggNut, a game studio based in Vancouver, British Columbia, tries to live up to the legacy of these older games by spinning a tale of noir intrigue. The game is set in a futuristic version of Vancouver, where sci-fi experimentation and dystopia clash with a rich backdrop of noir-inspired architecture. Art Deco theaters and cafes shimmering with neon lights are interspersed throughout neighborhoods and slums containing abandoned apartment buildings and decaying shacks, while the background reveals a host of gigantic skyscrapers and dystopian monuments to the Apes, Vancouver’s upper class, adding a dash of Bradbury to this otherwise Columbo-esque tale.

Backbone is but one of the latest pieces of mystery media to utilize anthropomorphic animals as its cast, with the game drawing inspiration from the comic series Blacksad and seedy detective serials of the previous century. You play as Howard Lotor, a raccoon and private investigator, who takes on the case of finding a man suspected of cheating. It doesn’t take long to get wrapped up in a world of seedy conspiracy involving cannibalism, political espionage, vice, classism and a generous side of intrigue to keep the plot going. In standard noir fashion, Howard acquires a sidekick—the mysterious fox Renee, who’s penning a novel on political corruption and needs his help to expose the city’s hotbed of corporate cahoots.

There’s no undercutting how fantastic this game’s world and tone are. The architectural clash between glitzy, towering high-rises and archaic brownstones is reminiscent of Bioshock, revealing a city that aimed for greatness but gave up halfway. In classic dystopian fashion, Vancouver is surrounded by a border wall that hides from view a mysterious outside world. Although Backbone doesn’t entirely commit to its noir aesthetic, its characters certainly do: Lotor is a solipsistic antihero without a future, and Renee is a mysterious young investigator without a past. The game is shrouded with mystery and slowly peels away the layers of its world like an onion as you progress through the story.

The aesthetics are where the game shines the most—outside of seedy, pulpy noir roots, the game features stunning art direction and a slick, engaging soundtrack. Pixel art has never looked this beautiful, with sharp, refined buildings and backgrounds dominating the screen, constructing a huge sense of scope and space. When the game zooms closer in, the characters appear delightfully crunchy and pixelated, appropriately shrinking down the game’s scale when inside buildings or rooms.

Unfortunately, despite a menagerie of gorgeous artistic locales, it doesn’t take long for Backbone to wear itself thin. Areas often consist of a dozen or more buildings, but rarely can you enter even one or two of them. The pixelated sheen of Vancouver-inspired architecture starts to wear away, revealing a series of concrete facades. The choice-based dialogue system deprecates into a very linear sequence of stock dialogue choices and, despite the game’s array of diverse and eclectic non-player characters, each of them talk and act the same, causing conversations to become tepid and artificial.

Backbone started out as a Kickstarter game, and it grew in appeal due to its gorgeous art and its promise of being a true detective game that allowed players to make choices that would significantly change the narrative of the story; a game that would pit them against puzzles that would require players to think deductively. In reality, Backbone is as painfully linear as a game can get. There are no choices that change or impact the game, and there aren’t even puzzles or gameplay elements that allow you to feel like a detective. Looking back at the game’s original promises, it’s palpable that a lot of content was cut—original gameplay footage featured combat, chases and complex stealth mechanics, none of which made it into the final release.

Despite what its name would lead you to believe, Backbone is a game that lacks backbone—it lacks structure, it lacks focus and it lacks a hook. A good mystery needs time to stew, as all the intrigue, drama and excitement sits and thickens in the pot. Backbone lasts only about four hours, which is nowhere near long enough for its ideas to settle into something discrete. The first three-fourths of this private eye romp are worth wading through shoddy mechanics and gameplay for, but, once you hit the three hour mark, the game desperately tries to rush towards an ending by cramming in a sci-fi conclusion that feels more District 9 than it does The Long Goodbye.

If you’re hankering for a detective game, you might as well give it a shot, but Backbone ends up feeling more like an undercooked appetizer than a delicious and filling entree.