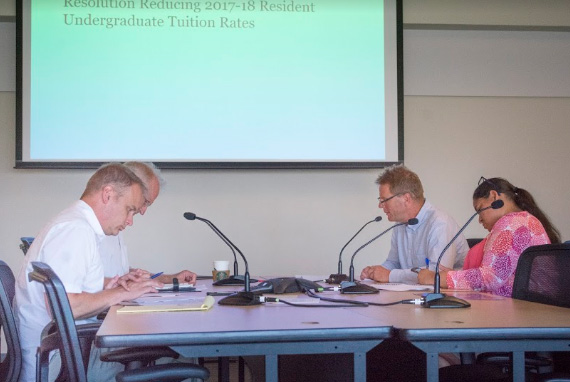 At a special meeting today, the Portland State Board of Trustees approved a resolution to lower the planned tuition increase set for Fall term.

The new BOT increase resolution is set to replace a prior resolution passed by the Oregon Higher Education Coordinating Commission in May 2017, which increased PSU’s tuition by 8.9 percent. The decision to lower PSU’s tuition increase was catalyzed by the Oregon Senate’s 30–1 approval of senate bill 187, adding an additional $70 million to Oregon’s higher education budget.

With the revision resolution, full-time PSU students taking 15 credits a term in the upcoming school year will pay $383 more in tuition and mandatory fees than they did in the 2016–17 school year. This increase is $248 less than projected from the 8.9 percent increase and brings total annual tuition and fees to an approximate $8,783.

Vice President for Finance and Administration Kevin Reynolds explained the state expects PSU to keep its next biennium tuition increase at or under 5 percent. As PSU continues to expect enrollment to decline and retirement costs to go up, keeping a balanced budget will be a challenge.

Although tuition cuts are lessened, the previously proposed $9 million in cuts for various academic departments will still go into place.

“We have things set in place at this point, but we will continue to look at how things play out,” said Andria Johnson, Director of the Budget Office. Johnson added that the administration will be “talking to the new president about strategic direction.”

Dr. Rahmat Shoureshi was chosen as PSU’s next president on May 15. BOT Chairman Pete Nickerson praised Shoureshi for his experience in fundraising, explaining at the May 15 meeting that fundraising was PSU’s “weakest link.” Shoureshi also aspires to reach out to more high school students to drive up enrollment.

Financial aid, as well as non-resident tuition, will not change from 2017–18’s anticipated budget. “We actually increased the [financial aid] budget by $2 million, so that is unchanged,” Johnson explained.

Associated Students of Portland State University President Brent Finkbeiner said he was glad to see the tuition increase drop, as he believes it will “alleviate some of the burden on students.”

“However, we are not out of the woods yet,” Finkbeiner added. “We don’t know what the environment is going to be in the future.”

ASPSU is recruiting students to seat the Student Budget Advisory Council in the fall, which will work with the BOT during the next tuition-setting process.

Jamie Partridge, student leader of PSU’s 15NowPDX, said the group will continue to fight for a $15/hr minimum wage. With housing costs increasing in Portland, Partridge said, students find it “harder and harder to live closer to school.” Partridge added that with these conditions, it is “ever more necessary” to increase students’ minimum wage.

Partridge claimed that even after the majority of students who voted during ASPSU’s last election campaign supported a $15/hr minimum wage, the BOT did not pursue the initiative.

“We’re pushing forward with our campaign to the [BOT] to cut from the top and build from the bottom,” Partridge added.

Partridge said he feels taxes in Oregon unnecessarily burden the middle class. Last year’s Measure 97, which would have increased taxes on certain Oregon corporations and helped to fund education, health care, and senior services “was a huge defeat,” Partridge said.

Reynolds said the administration recognizes “there are many other [monetary] demands on the state.” While Oregon universities had asked for $100 million in additional funding for the 2017–19 biennium, Reynolds said, “We are very thankful for the additional $70 million. It’s not a perfect fit, but we are grateful.”

The Portland State University Faculty Association, PSU’s adjunct faculty union, experienced adjunct layoffs earlier than normal this year, they believed, due to anticipated budget cuts. Some of these cuts laid off adjunct faculty that had taught at PSU for decades.

Ariana Jacob, PSUFA’s grievance officer, said in a statement that, “[PSUFA] wants to emphasize that any increase in tuition at this time is putting a real burden on our students.” Jacob’s statement continued, adding, “We need our leadership at the board and administrative level, as well as our city and state, to push harder to change how we fund education so that we don’t keep undercutting our students and our future.”