The catastrophic “now” that this moment inhabits has created a dynamic within the student body that is terrifying and isolating, a new normal that has taken students away from their peers and friends and created a new dynamic campus that sprawls worldwide. With fall term at PSU officially on track to be a mostly remote learning term, anxious students, especially those just out of high school, will again have to make it without the physical bonds they were socialized with growing up.

Instead of catching up with old friends in an arranged exchange of recent life stories, something increasingly anachronistic as anyone under the age of 25 is younger than instant messaging, students will need to engage with existing networks of friends online. Unfortunately for many communities in the United States, young adults are upsetting this terrible new dynamic by returning to their former partying habits.

That includes students in every age group.

It is understandable many have reached limit after limit when it comes to isolation, even those who are still working throughout this crisis. It is understandable some would be frustrated by the constantly evolving situation at hand. These and other concerns are understandable because everyone is feeling these things.

We are all in this together, and the importance of doing things with your community rather than opposed to it is heightened right now. Therefore, socializing in ever-larger groups is bad, due to fairly high daily infection rates in Oregon and beyond, as well as the apparent shortage of national, focused determination for reasons other than war. Daily stories that have moved from determined contrarians flouting the law to beaches filled with regular folks have only heightened the public resolve to move past this, even if it is just over in their mind.

Students need to make up their mind.

Alternatives to socializing in person

If you absolutely must go out into public despite repeated pleading with you to stay inside, then only local laws will stop you. For the rest of us, there are more than a few creative ways you can socialize without necessarily exposing yourself to illness.

Mobile games: Nowadays, geolocation features are standard in most newer mobile games, creating a physical playing space that brings video games into the “here” without necessarily requiring being within a block of each other. For example, new features in the Niantic game Pokémon Go have recently made it easier to engage with distant players while still taking advantage of the physical aspects of the game.

Chatrooms, the old-school kind: For years, the humble chatroom offered a refuge for people who wanted to be social but did not have the physical ability or capacity to meet with others. This could be far-flung friend groups that loved chatting about TV shows, or it could be conspiracy theorists talking about HAARP. Now, these groups are in the palm of your hand with new technology that takes the chatroom off the wires and moves it into a neat, always-there companionship.

Geocaching: The practice of hiding a cache of goods at a geographically specific point is understandably daunting at first glance, especially with all the jargon just tumbling out of any mention of the hobby. The idea, though, of exchanging gifts to acknowledge each other’s smarts, has a great appeal in these times. You can social distance, but at the same time you get to find and pick up the caches left behind by friends and strangers.

Anti-pool party: Pools aren’t going away any time soon, so spending the next year or two away from them is good for both the soul and your overall health. Instead of sliding into a crowded algae farm, why not invest in a small kiddy pool and hang out with your favorite chilled beverage and all your friends doing the same—but with video chat!! How very modern. 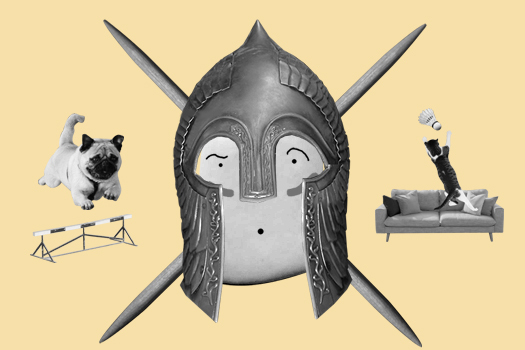 Sports to play while quarantined