Students got the chance to talk to Chabon in a one-on-one Q&A session in the Smith Memorial Student Union on Jan. 27. Later that evening, the Smith Ballroom filled with students, faculty and community members to hear him speak at the main event.

At the Q&A, students were able to talk to Chabon about topics ranging from his experience as a Pulitzer Prize winning novelist, to being the showrunner for CBS’s TV series Star Trek: Picard, starring Patrick Stewart.

“Being a showrunner is a really strange job,” Chabon said. “It’s like being a chef of a restaurant—a really, really busy and successful restaurant.”

Chabon is widely known for his books like The Mysteries of Pittsburgh, Wonderboys, and most notably The Amazing Adventures of Kavalier and Clay.

When asked about what it was like to shift from working alone to having to collaborate with others on the hectic set of Picard, he said, “Well, I don’t think anyone becomes a writer because they like being around people,” as everyone erupted in laughter. “It was a change for me to start collaborating, at the time I was turning 50, I decided to start saying yes to things,” he said.

He went on to explain that it’s important for writers to take that first step, and that though it may be intimidating, confidence and discipline is key. Chabon continued, “I’ve had plenty of setbacks and failures, but even if you just experience some kind of low or slight, or whatever it may be, I sit down at 10 o’clock and it’s just time to work.” 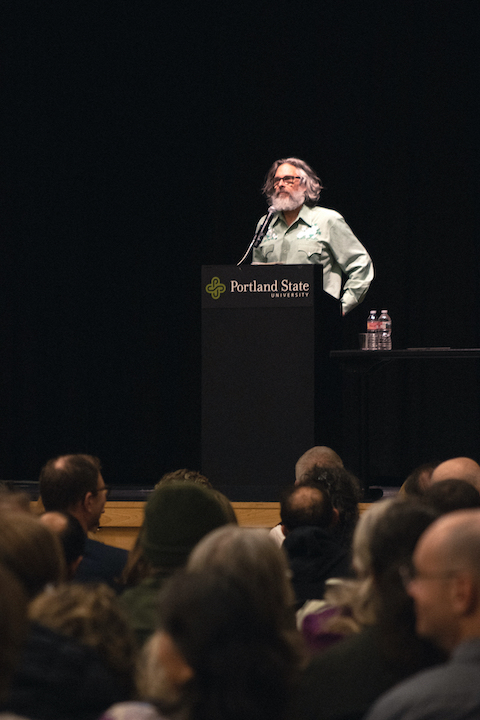 The Q&A ended with the question every writer wants the answer to: “What’s the key to winning a Pulitzer prize?”

Chabon laughed and concluded that unfortunately, there isn’t one. “I was definitely not expecting it when it happened, and it probably won’t happen again,” he said. “The time of white, male, Jewish authors winning ended with me, but what they really look for is something that is defining the American experience in a way it hasn’t before and there are many ways to do that, and I guess Kavalier and Clay does it.”

Garret Rucker, a PSU student and a fan of Star Trek said he was intrigued by the opportunity because “[Chabon] knows his craft, he’s good at his craft. I have respect for someone who, at that level, is willing to come to a college like this and share their experience and knowledge, and I wanted to be a part of that.”

Similarly, fellow PSU student and poet Andrew Richman had an especially important reason to attend. “I found a copy of his book [The Amazing Adventures of Kavalier and Clay] at Goodwill and I read it during a pretty important time in my life and it was incredible. Then I saw this and I’m like well I have to go because he’s kind of the reason I’m writing today.”

For a lot of new writers, the industry can be just as difficult to navigate as the writing process. “I learned to not be afraid of the craft,” Rucker said. “I think it can be very intimidating especially when you have a new idea. The hardest part is the first step and I think [Chabon] kind of demystified the whole experience and kind of enlightened the idea of just enjoying the process.”

“People usually think it’s a pretty serious business; I’ve been to other events where there are Q&A’s and the author is standing in front of the audience very formal,” Richman said to the opposing contrast of the circle the attendees sat in with Chabon. “But I learned that he’s just a very down-to-earth, chill dude who likes to write.”

Paying tribute to his father, who passed away in 2019, Chabon read a piece that he recently published about his father and their love of Star Trek and the beloved character Mr. Spock. Having always been a lifelong lover of the series, he was brought onto the show at first as a writer and producer, eventually stepping in as showrunner.

It was obvious his words were moving. Attendants held onto their loved ones as Chabon described his father unconscious in the ICU surrounded by “tubes and wires in his starship of a bed” at 3 a.m. as “his abdomen rose up like a telescope dome of an observatory.”

Tony and Sandra Vegas were two of the attendants at Chabon’s lecture. Familiar with Chabon’s work, the two decided to attend, recalling the essays they had read by him as “captivating.”

Vegas further explained that he liked the stories about Chabon’s sons. “As a father, I felt compelled to hear about his path.” Happy that Chabon decided to read his most recent piece about his father, Vegas said he admired how Chabon “was modeling the grace of his mourning for his father and that behavior to his kids.”

After finishing his reading, Chabon answered more questions from the audience, saying they “don’t have to be about writing, or books or Star Trek, they could be about hairstyling advice, dating or relationship advice,” Chabon joked.

John Hackney, who heard about the event from his partner who works at PSU, said, “I know his writing is funny, but he’s a lot funnier than I expected him to be in person,” and that he was impressed at how he was “really personal and engaging,” when reading and answering questions.

Chabon later said that he and his wife will be working on trying to make a TV series for Kavalier and Clay, so it looks like he will have to learn how to be around people a lot more.