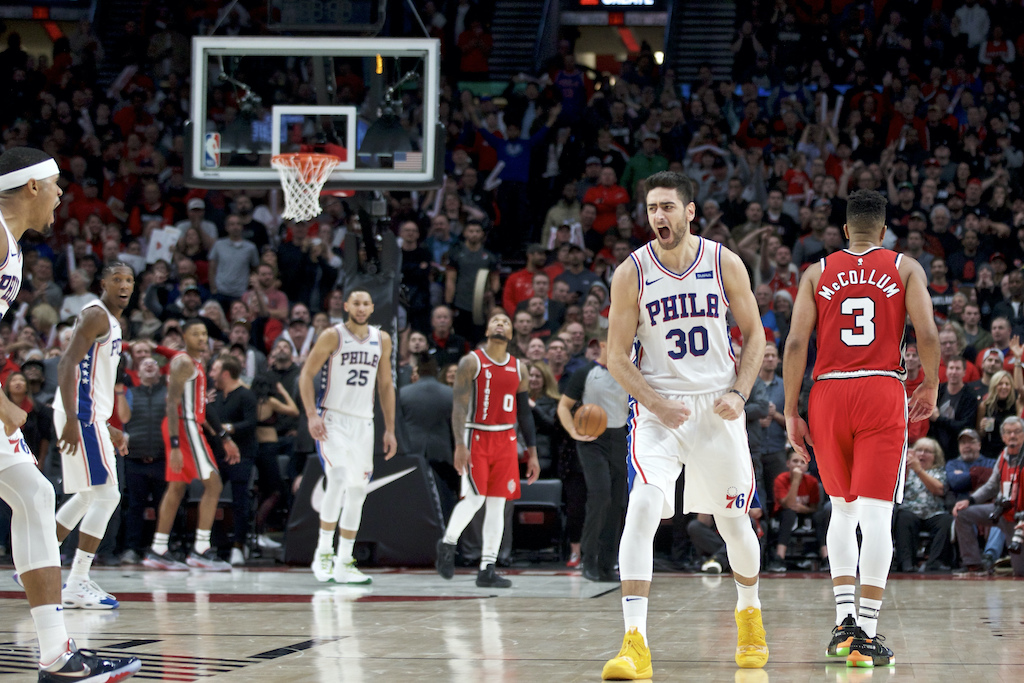 Despite loss to Philadelphia, Blazers fans had plenty to celebrate

The Portland Trail Blazers faced off against the Philadelphia 76ers on Saturday, Nov. 2 in the first game of their Decade Nights event celebrating fifty years of Trail Blazers basketball. Unfortunately for Portland, the Sixers spoiled an otherwise successful night with a clutch 3-point shot from shooting guard Furkan Korkmaz with 0.4 seconds remaining in the game. After a game-winning attempt from point guard Damian Lillard fell short, the Sixers prevailed with a 129-128 victory over the Trail Blazers.

The Blazers came out fast and strong, holding the lead for the majority of the first period. The 76ers ended the first quarter with a crowd-silencing, tip-in buzzer-beater by Al Horford, leaving the Blazers lead at 32-27. The Blazers got off to another hot start in the second quarter. Rodney Hood scored six points in less than a minute, bringing the lead to 57-45 during a 15-0 Blazers run. Portland led by as many as 15 points in the first half before heading to the locker room at halftime with an 11-point lead, 68-57.

The third quarter served shining moments from both the Blazers and the 76ers, with each team scoring 35 and 34 points respectively. The 76ers started to build up momentum, sparked by a Ben Simmons breakaway dunk on Lillard late in the third quarter. Kent Bazemore picked up his fourth personal foul in less than 20 minutes of play, putting him in foul trouble for the rest of the game. Al Horford and Tobias Harris took advantage of the Blazers’ dip in energy, putting together a scoring run that brought the 76ers to within ten points of the Blazers heading into the fourth quarter.

The 76ers came out swinging in the final quarter, going on a 6-0 run to bring them within four at 98-102. Lillard kept the crowd roaring with three consecutive shots from outside the key, but his effort was matched by back-to-back slam dunks from 76ers Harris and Simmons.

Rodney Hood left the game with an injury following a collision with Simmons, Hood was helped to the locker room with less than five minutes left after putting up 25 points in the game. With Hood out the Blazers could not hold off the 76ers’ imminent comeback. Even a clutch three-point shot by Anfernee Simons to give the Blazers the lead with 2.2 seconds remaining was not enough to fend off a shocking game-winning three by Furkan Korkmaz. Blazer fans were left standing in awe as Lillard attempted a Hail Mary shot with 0.4 on the clock to no avail.

While the outcome was not what Blazers fans had been hoping for, there was still plenty to celebrate on the night as Portland honored several Trail Blazers legends from the ‘70s. As part of their celebration of the 50th year in the National Basketball Association, the Blazers are hosting five decade-themed home games. Several Trail Blazers legends were in attendance for Saturday’s game and the halftime performance featured former America’s Got Talent contestant David Garibaldi speed-painting a portrait of Blazer legend Bill Walton, the star of Portland’s 1977 championship team, as Blame it on the Boogie by Michael Jackson pumped through the stadium.

The 1977 season marked the Blazers’ first and only championship title. To commemorate this, the Blazers brought back some of their legendary players along with Bill Schonely, also known as “The Schonz.” Bill Schonely was the Trail Blazers’ color commentator for nearly three decades, starting from the team’s launch. Schonely also coined the phrase “Rip City,” which has since become embedded in Portland culture, spanning into clothing, food and the cannabis industry.

Schonely described the experience of having coined such an iconic phrase as “overwhelming, but a huge honor.”

“I didn’t even mean anything by it when I first said it,” he said. “It took a few years to catch on and then became a staple for the team, and now the city. “It’s everywhere you go, it’s Rip City. I’m overwhelmed by it.”

Rip City has grown exponentially since Schonely first spoke the phrase into existence in 1971, and the Portland Trail Blazers have come a long way since their inaugural season in 1970. The Blazers will be seeking their second NBA championship in team history this season. This year might be as good of a chance as Portland has had in a long time.

“I would love to see that happen,” Schonely said. “The West is open right now, it’s anyone’s shot.”

There will be a Decade Night themed game each month at the Moda Center. Fans have the option to buy Decade Packs to attend the next four events. The next themed game will be Friday, Dec. 20, when the Blazers play the Orlando Magic.