For some people, Pride is a fun gathering that creates an opportunity to “safely” enjoy an environment filled with people who are like you. This isn’t the case for everyone. Pride began as a protest against police brutality, discriminatory legislation and the violence facing the community.

The average life expectancy of a trans person is 35, gay conversion therapy is still legal in 36 states and homosexual relationships are still banned in 73 countries. There is no legitimate progress when the system and our government is still against us.

The Stonewall riots occurred in 1969 outside the Stonewall Inn in New York City. The initial riot was the result of policemen invading a popular gay bar and arresting not only the patrons but also the workers. At the time, there was a law in New York that required everyone to wear at least three articles of clothing related to their “biological gender.” The uprising may have seemed to be a spontaneous protest, but it was an inevitable reaction to the perpetual police harassment and social discrimination suffered by the queer community in the 1960s.

Although there had been other protests by queer groups, the Stonewall riot was perhaps the first time lesbians, gays and transgender people saw the value in uniting behind a common cause. In  the context of the civil rights and feminist movements, the Stonewall riots became an awakening force.

The first Pride event was in 1970 in Washington Square Park. The event was held in June to commemorate the Stonewall riots that had occurred a year earlier. This Pride was not a party but a march that continued the fight activists such as Marsha P. Johnson and Sylvia Rivera started. Johnson and Rivera were the leaders in the Stonewall riots and also founded Street Transvestite Action Revolutionaries (STAR).

In true capitalist fashion, companies have found a way to make a profit off the struggles and safety of the gay community. One of the first major endorsements that Pride had was an Absolut vodka campaign. This alcohol-fueled marketing set the precedent for companies to view Pride as an opportunity to prey on the celebration by amping their product.

Instead of supporting the community by not affiliating with prejudice politicians and supporting harmful organizations that falsely embrace us, companies need to be held to a higher standard of allyship and dream of a world where LGBTQ+ people are genuinely supported and recognized. But unfortunately, bandwagoning of social rights sometimes needs to come before the genuine intent to support.

There has been some “progressive” legislation that ensured the basic rights of the queer community. These laws include work place equal rights, removal of all sodomy prohibitions laws and the legalization of gay marriage. In addition to this, homosexuality was also removed from the American Psychiatric Association list of mental disorders. In Washington, California and Maine, you can now select “X” as your gender marker if you do not identify with the common female and male binaries. This is a profound step in inclusion for nonbinary people.

In addition to this, New York recently announced the construction of two new monuments that will be of Johnson and Rivera. These will be the first trans monuments in the country. Their goal of having these structures is to pay respect to the hard work and dedication they both put forth for the the queer community.

Despite all the so-called progress, the Trump administration has dedicated itself to dismantling civil rights for lesbian, gay, bisexual and transgender people. Trump and the politicians surrounding him have shown contempt for LGBTQ+ students, transgender troops and the entire population of over 10 million LGBTQ+ people in this country according to a research conducted by University of California, Los Angeles.

From attempting to prohibit all-gender restrooms in schools to the trans military ban, we are in an era of vicious and targeted attacks. There is no safe space under the rule of this administration when rights as basic as healthcare are being compromised. Trump has called for the ban of same-sex couples adopting or fostering children and a reinstated exclusive defintion of gender.

“There is a systematic and sinister erasing of LGBTQ+ protections and policies happening at the hands of this administration,” said Zeke Stokes, chief programs officer at GLAAD. “Now more than ever, it’s vital LGBTQ+ Americans and marginalized communities raise their voices and tell their stories. The LGBTQ+ community will not go into hiding, and we will not be silenced.”

There have been isolated events of “progress” in this country for the LGBTQ+ community. Individual states have utilized their right to enforce laws in support, but our presidential administration has done the opposite. In times of such blatant attacks, Pride should be celebrated and executed with purpose. We must remember the fight of those before us and not get caught up in this idea of “progress.” We must remember that there is still a fight. Our trans brothers and sisters, nonbinary people and all of the members of the queer community deserve better than monuments and false inclusion.

Dylan Burdette and Taylar Rivers contributed to this report. 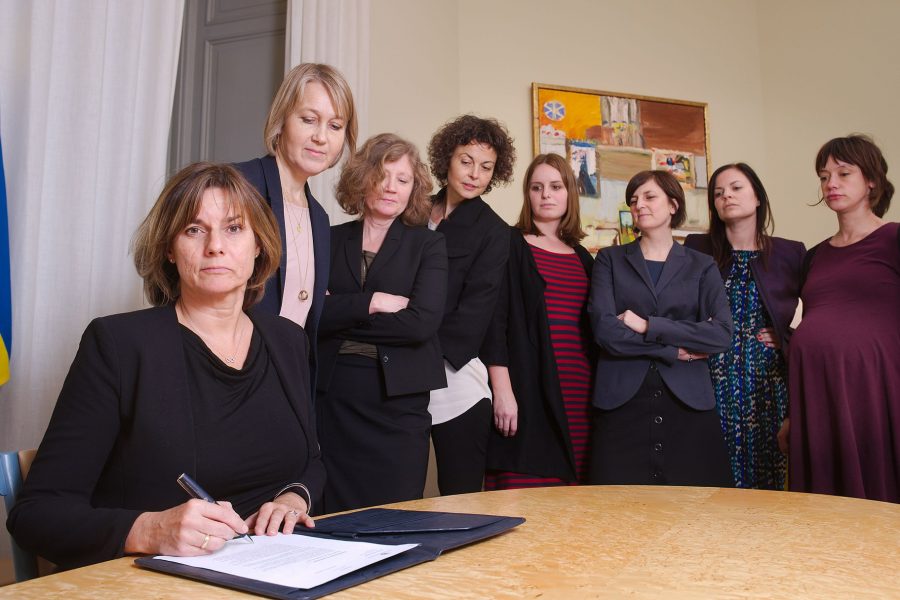