The gathering occurred on Saturday, April 25 at around 1:00 p.m. While Reopener was listed as the host on Facebook, the event organizer didn’t make their presence known. With no clear sign of leadership, Janice Daniels, a rally attendee, took charge.

“There wasn’t anybody leading,” Daniels said. “I did eventually find the girl that was organizing it—her name is Joy, but she doesn’t like to speak in public.”

Wielding an electronic megaphone, Daniels often led the group in songs such as “God Bless America” and “This Land Is Your Land.” While she wasn’t an organizer for the event, Daniels was one of the most vocal ralliers. “I’m tired of sitting in quarantine,” Daniels said about her reason for attending. “And it’s time that we take back our freedoms.”

Daniels, a homemaker, has been under quarantine with her husband and son for 40 days. “My husband is working at home,” she said after being asked how she was affected by the stay-at-home order. “Our investments have definitely taken a hit, but I’m not able to use my house, because my husband uses the family room for his work room and my son uses the office and basically I’m quarantined to my bedroom.”

Daniels considers herself to be a social person and someone who has been greatly affected by Governor Brown’s stay-at-home order.

With about $2,000 in his bank account and his combined rent and utilities exceeding $1,300, Bluehair said, “I have less than two months before I have to go be homeless. So do I not have a right to live?”

As ralliers sang “The Star-Spangled Banner,” Gwen, a stay-at-home mom who attended the rally with her two daughters, shared her thoughts on Bill Gates and Event 201—a series of exercises and discussions confronting the dilemmas of responding to a “scientifically plausible” pandemic in October of 2019—in relation to the coronavirus.

“This was already planned out with Event 201,” Gwen said.  “Everything was already in step. I feel like this was pretty premeditated. Whether I’m right or wrong is irrelevant. I think there’s clearly deception.”

“Not to mention the fact that Event 201—that [Bill Gates] orchestrated—is eerily similar to what’s happening now,” Gwen said. “And it literally took place right before Wuhan, so dots need to be connected I think.”

According to an article by The New York Times, Gates has recently been targeted by conspiracy theorists for supposedly starting and profiting from COVID-19. “Bill Gates is easily transformed into a health-related meme and figure because he’s so well known,” said Whitney Phillips, an assistant professor at Syracuse University who teaches digital ethics. “He’s able to function as kind of an abstract boogeyman.”

Between blaring car horns, Daniels’ megaphone was passed around to attendees wanting to address the crowd.

In front of the gate to Mahonia Hall, David Medina spoke through the megaphone about his motivation for starting the group “Oregonians for Trump,” ending his speech with a message to the younger generation at the rally.

Mark Zimel shared with the crowd a letter to the editor written to the Douglas County Herald, a weekly newspaper in Douglas County, Missouri, by Dr. Kimberly Brady, M.D.

Brady’s speculative letter does not include any statements or facts, but consists of “what if” questions surrounding COVID-19. An excerpt from the letter states: “What if [Dr. Anthony] Fauci has close financial connections to Bill (the computer and vaccine salesman) Gates? What if natural immunity from a virus entering your system through the throat is far superior to a synthetic chemical cocktail called a vaccine shot into your body with a needle? What if the alleged COVID-19 deaths were mostly people who were already dying? What if your best defense against all viruses was a healthy immune system?”

Following the oration of Brady’s letter, Zimel said: “We want to be guided by God and be faithful to him and we do not want to submit to fear pressure.”

Through her megaphone, Daniels led the group in shouting “open Oregon now” in the direction of the Governor’s residence, and then the rally was over.

“I would like [Governor Brown] to open up the state on Monday and everything [to] resume as usual,” Daniels said about what she hoped for next. “I’m willing to stand six feet apart from people, I’m willing to respect other people, but I don’t want my freedoms taken away. I want to be able to go to a restaurant. I want to meet with my girlfriends. I want to get a manicure. I want to get my haircut. I want to live.”

Caroline, one of Governor Brown’s neighbors, was standing outside her home as the crowd dissipated. She said this was the second gathering outside of the Governor’s home. The first consisted of licensed childcare providers and took place a week earlier.

“Those people last week were all wearing masks and I felt were very appropriately distancing themselves in contrast to [the reopen Oregon rally],” Caroline said.

Caroline has two sons, one of whom was sick during Saturday’s rally and couldn’t rest due to the noise. She doesn’t mind peaceful protests and thinks freedom of speech is important, but didn’t like the trucks driving by, honking their horns.

“I don’t agree with this message at all,” Caroline said about the reopen Oregon rally. “I don’t think a haircut is more important than safety, but people are entitled to say what they want to say as long as it’s done peacefully.” 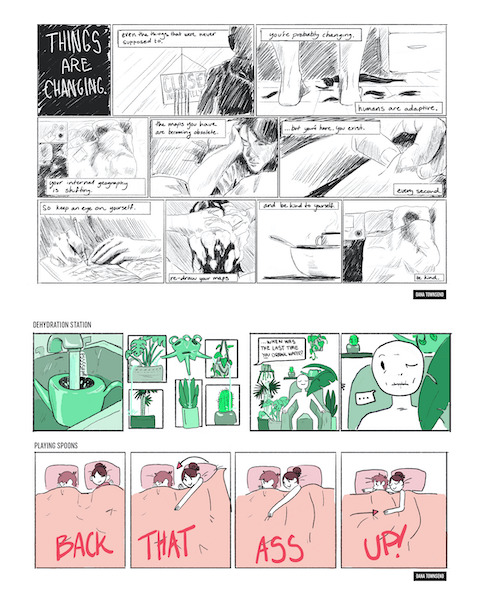