Most people who love music have, at some time in their lives, been in love with radio. Scanning the dial and being slain by a song you didn’t know existed – “Moondance,” or “Smells Like Teen Spirit,” or “Hey Ya!” – is a spine-tingling experience.

Once, I couldn’t get enough. But radio’s endless repetition – and all those commercials – snuffed the spark. Frustration grew, and I started to look elsewhere for satisfaction. Elvis Costello was right: Radio had fallen into “the hands of such a lot of fools trying to anesthetize the way that you feel.”

Can satellite radio return the romance to a medium rendered moribund by corporate consolidation and ultraconservative programming?

Are Sirius and XM Radio – whose combined 200-plus channels offer 129 commercial-free, 24-hour music streams ranging from hip-hop to show tunes – the Holy Grail for fans who abandoned traditional radio as a reliable source for good new music?

Let’s not go overboard. Both XM, with 1.4 million subscribers, and Sirius, with about a fifth that many, are conservative in their own way. Each offers the popular formats (classic rock, smooth jazz, contemporary hits) that make FM radio sound the same from Philadelphia to Los Angeles.

In fact, those tired-and-true formats account for the satellite services’ most popular streams. The Backstreet Boys and Britney Spears attract far more listeners to XM’s “The ’90s” channel than Chucho Valdes and Mongo Santamaria do to “Luna,” the Latin jazz stream.

But in two ways, satellite blows away traditional radio – now being called “terrestrial” radio, as if XM and Sirius were being programmed by E.T. and Yoda.

First, there are no commercials, which means you get 60 minutes of music an hour, not the usual 40. It makes an incalculable difference.

Second, satellite offers real choice. The reason country radio stations are so lame is that major-market stations play the same Kenny Chesney and Shania Twain over and over. Sirius and XM each offer five country genres, including bluegrass, alt-country and all-hits.

So which is better, XM or Sirius? I’m going to punk out on that one.

Not wanting to be caught without a counteroffer, the services mirror each other. Sirius has “Backspin,” an old-school rap stream that’s not all that different from XM’s “The Rhyme.” And both carry ESPN Radio, the antidote to the homer myopia of local sports-talk radio.

Some practical matters: The digital sound quality of both services is excellent. And each uses receivers with an LCD readout that identifies title and artist as a song plays – awesome, though distracting when driving.

I mainly listened to XM and Sirius in my car, which, if you don’t have the receiver factory-installed, can be a messy proposition. A magnetized antenna goes on the roof, attached to the unit with easily tangled wires. The player is powered through the cigarette lighter, which I hooked to the car stereo through a cassette adaptor, which was sometimes balky, and sent me into fits of satellite radio rage. (XM and Sirius now offer devices that allow the signal to play through an unused FM radio frequency in most areas.)

After a few months, the antenna wire to my Sirius player snapped, and had to be replaced. Also, when I hooked the portable Sirius unit to my home stereo – a simple and rewarding process – I had occasional signal problems. I never tried it with XM, so I can’t say whether the results would have differed.

Satellite radio is ideal for listening at home or on long drives. But with all the setup, and the fear of having my car broken into, I often kept my unit boxed in the trunk rather hook it up for a short jaunts.

Still, for music heads, satellite service is an innovation that quickly becomes indispensable. The stations that dig deep are invaluable for actually hearing new music, rather than just hearing about it.

Since both services have their strengths, I’d test each on the Web at www.sirius.com and www.xmradio.com before committing.

XM has plenty of features I’m happy with, and I’ve got more exploring to do. But the tingle I get listening to “Chill,” and Sirius’ deals to broadcast all NBA games and next season’s NFL schedule, have me thinking I may have erred in going with XM so early. I’ve barely got time to listen to one of them, but I’m going to miss having both. 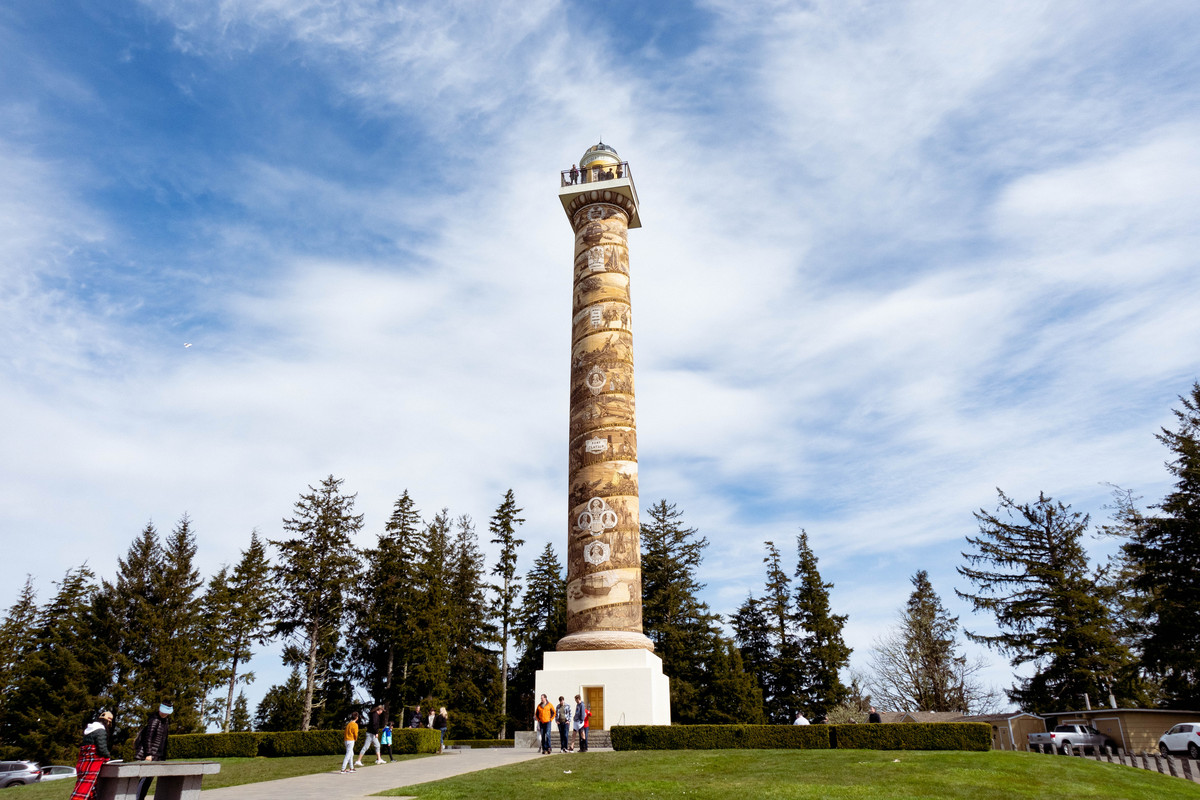 The Astoria Column, located atop Coxcom Hill, in Astoria, OR. Camden Benesh/PSU Vanguard

Oregon’s Astoria Column is a mural with a view