This is Miles farewell letter that I found hot waxed to my garden gnome last week.

I’m randy as ever and itchin’ for a pilgrimage, so I must leave you. The arts have kicked my arse. I have been cut down to size by the grandiose infinity of it all. Alas, I will return when you least expect it and need it most, so fear not.

Why, you ask? Since I still care, I’ll level with you. It would be better if we were just friends. It’s all moving so fast. You pick me up for free, spread me open and devour every inch of me, spilling jam and Aramark grease willy-freaking-nilly.

You say I’m not number one anymore. But damn, baby, I took the whole roll of numbers yo! I’m one through 1,000! I know that only buys me like a couple months baby, but please, not in the winter time, It’s cold! My neck is freezing. I cut my mullet, sold my Bon Jovi cassette and even gave up the hunt for my marmot parents, who may only have like a second left on this cold, cruel bubble. All to be any number between one and 1,000. Is that so much to ask? To be picked up once in while for a little romp.

I can only compromise so much though, you have to give a little too. I gave you the arts. I gave you the culture. I made you feel all warm and safe like I was your mother.

But you have a new man now. He’ll treat you right. If he doesn’t, so help me I’ll bring my sled marmots up in this piece and …

Honestly, expect the same fresh coverage you had with me. But don’t consider him a replacement. Hold a special place in your heart for me, and don’t forget these steamy six months we shared.

If you really want to read this column again, I can be persuaded. But you have to try a little, mmmkay? It’s simple enough; the address is in the box next to the picture of the scary guy.

All this separation anxiety has put my tutu in a bunch. I need to find my roots and answer the true meaning of the “Miracle Mile.” Is it succulent and sweet, or oozing with rich cream? What does its essence smell like? I’m going to look to the South, the North, in and out, left and right, up and down. Then I’ll turn the shit up and do it again if I have too. Here’s what I know so far, so read on …

The name came to me one day as I lay in the tub, knitting some knobbins. Like the knobbin topsy knot on the knobby tippy top or the key of Beotch, the M.M.’s true essence has been elusive. This girl told me last week that with my innocent demeanor and her freaky-deaky attitude, we could really clean up. Maybe it’s kind of like that. Or maybe not.

It’s a radio show and a column, but it must be something else as well.

I’ve learned this so far: In Miami, according to miami.travelape.com, the Miracle Mile is the “preferred shopping district in Coral Gables.” Similar to my own strategy, its route to your heart is with a “wide selection of bridal boutiques, luxurious lingerie stores, jewelers and more.” Who says monogamy is out? Not us. “The Miracle Mile attracts customers from around the world as a prime destination when planning a wedding.”

The M.M. is very diverse. The Miracle Mile strip in L.A. is home to “The Price Is Right” T.V. show and the National Council of Jewish Women. In the “Miracle Mile” movie, the handsome Anthony Edwards (E.R.’s DR. Green) plays a young, hip musician (like DJ Miles) who picks up a ringing telephone hoping for a young, hot, sex-crazed pop star.

Much to his dismay he is informed that a nuclear war will kill everyone in a few hours, before he can find a hot young anything!

Meanwhile in the great state of Kansas (drum roll please) The Theta Xi Fraternity and the Pi Beta Phi Sorority Kansas State chapters have lined up a “miracle mile” of quarters to donate to charity.

Representing their dramatic Greco-superhero names reminiscent of ancient warriors on the WB like “Xena;” the “pukes” dress in metallic breastplates and multi-colored tight-and-cape ensembles to ensure no monetarily challenged people pick up the quarters.

Those corn-fed Greeks won’t outdo the great, Inland Empire capital of Spokane, Wash. The Centennial trail, which kicks the decadal trail’s length challenged ass, is proud home to a perma-bronzed commemorative medallion laden mile of paved trail. The medallions, which are rumored to make great commemorative gifts, are far superior to Kansas’s quarters.

I’m still a little confused, so off I go. Thanks for reading. If you do it, I will come back. Sincerely, A.M.

On a brighter note … wait a second, hold on; I’m all farklemt now dammit!

You see Miles is leaving the A&C desk to sew his freaking oats or whatever. He may not even do this column any more! And I, Beotcho Sinclair, will have to fend off the slings and arrows without Miles’ warm bosom for comfort. I’m supposed to talk to you about Arts and Culture, so talk amongst yourselves while I become un-farklemt. A topic: Pop culture is neither culture nor popular.

Word in the dorms is we don’t cover enough pop culture. So chew on this: The mass media, capable of controlling our minds since the ’50s, has brainwashed us into adoring Britney Spears. Sure, they use such tactics in the mass media coverage of project blow-shit-up or whatever, but this is more important dammit!

Spears obviously sold her soul to someone. She’s “hanging out” on the cover of the new Rolling Stone, and inside she says she wears “retarded things just to see what the press will say. That’s the fun of being a celebrity …” I’ll bet no one in the press has accused your precious publicists of replacing your eyes with those of Ganesh you hypnotic little tart.

I don’t care about your clothes, or lack thereof, miss. I care about my poor manipulated mind. I can’t even make heads or tails out of the world situation. What is going on, and why? The mainstream media talks in circles without saying anything and before I can get any critical thinking done, there’s those boobs and those eyes, mercy! It’s no wonder Miles is leaving the Vanguard on pilgrimage to Idaho, or was it Kansas, to write the great American novel “Behind the eyes of Ganesh.” That’s my guess at least.

Any-hoo, while he’ll no longer be Arts and Culture editor, Miles will still contribute articles featuring cutting edge commentary, host the Miracle Mile radio show and entertain the occasional fancy dancer in clubs of Portland. This column may or may not return. Some stars just shine too bright and burn out early. Sigh. 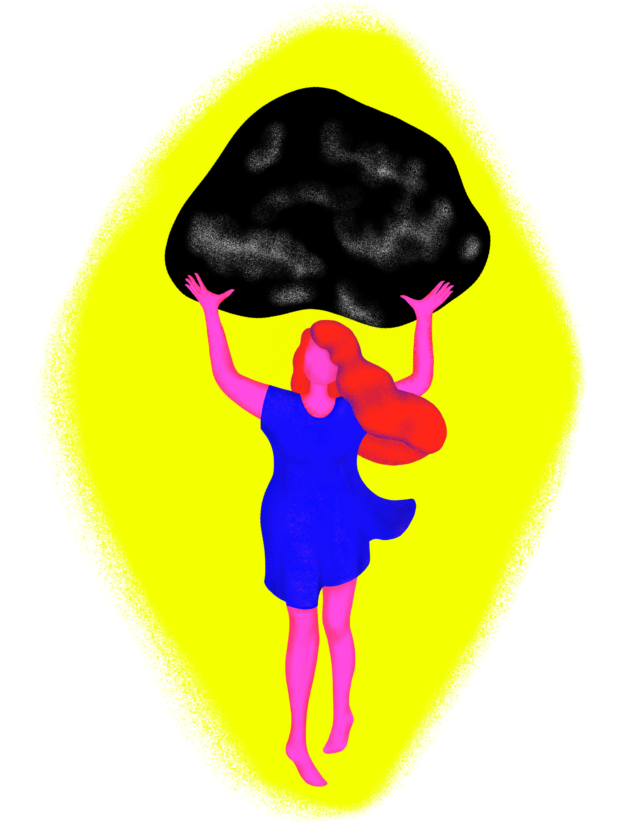