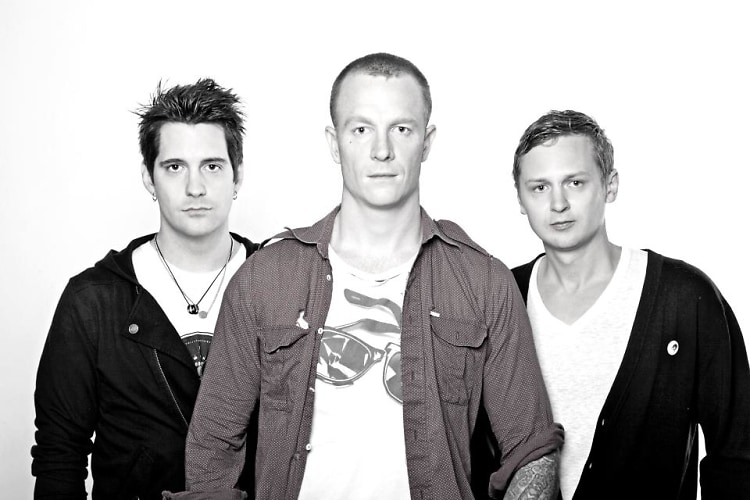 Towards the end of 2020, multiple COVID-19 vaccines with efficacy ratings of up to 95% were approved for emergency use rollout. This was unexpected, and from a medical and scientific standpoint, completely unprecedented.

But something else incredible and unexpected happened towards the end of last year. Eve 6—the post-grunge band and erstwhile fixtures of ‘90s and early ‘00s “modern rock” FM radio programming—reentered the public consciousness by way of Twitter shitposts.

This is unusual for a couple of reasons. First of all, most bands from this era have negligible—or at least very impersonal—social media presences. To quote Max Collins, Eve 6’s 42-year-old frontman and lead Twitter operator, social media users are accustomed to ‘90s bands being “dull” on the internet. Secondly, the Eve 6 Twitter phenomenon marks one of the first times an artist’s actual art feels explicitly subordinate to their tweeting. You can now be an Eve 6 fan even if you think their biggest hit, “Inside Out,” is one of the most cringingly overwrought alt-rock hits in existence. I know because I’m one of them; I ordered an Eve 6 t-shirt last week.

So who is Eve 6? If you’re a zoomer or at that precarious millennial cut-off point, you might not even associate their Twitter with any music in the first place. Eve 6 was formed in Los Angeles in 1995, a year after Nirvana frontman Kurt Cobain died of a self-inflicted gunshot wound. (Or, if you’re a gullible toddler, you believe he was the victim of a murder conspiracy orchestrated by Courtney Love.) During this era, record label executives were still searching for an act to quietly fill the crater left by their flannel-clad martyr. This resulted in a lot of goofy major label signings: Silverchair was one such band, an Australian trio of teenaged Nirvana cosplayers whose hilariously contrived major label debut Frogstomp was issued in 1995. And then there is, of course, Creed, an implicitly Christian band of adult Nirvana cosplayers whose 1997 major label debut My Own Prison is its own punchline.

Roughly speaking, it was in this cultural environment that Eve 6 scored their 1998 mega-hit—the aforementioned “Inside Out,” a funky, grunge-flecked pop-rock ditty that Collins now self-deprecatingly refers to online as the “heart in a blender song.” Unfortunately, Eve 6 weren’t quite able to maintain that momentum—their sophomore album from 2000, the deafeningly compressed Horrorscope, earned them the rare, two-out-of-ten rating from SPIN, that era’s premiere arbiter of musical taste. By their third release, 2003’s It’s All In Your Head, Eve 6 were off the charts and more or less out of the music-buying public’s purview.

It has been argued that Generation X musicians had the toughest time acclimating to the industry’s rapid technological transformation at the dawn of the new millennium. Bands like Eve 6 hail from the final era of multi-thousand dollar advances and flippant major label signings—by the time MySpace and Bandcamp came around, they were strangers in a strange land. This is probably somewhat true, and it’s likely why so many once-reputed rock bands from this era have devolved into staples of the C-tier casino circuit—or, even worse, flagship performers on the Mark McGrath and Friends cruise. That could be an entire article in itself, but this cruise—which was poised to launch in 2013 and would have featured performances from Smash Mouth, Sugar Ray, Spin Doctors and others—was cancelled after an engine fire resulted in the entire cabin overflowing with human waste.

Thanks to Max Collins’ snarky, diaristic Twitter presence, Eve 6 has fared better than most. He jokes that he feels like Eve 6 is “gonna be huge again”—and he’s probably right. Interspersed between anecdotes involving Third Eye Blind and spicy takes about how Fountains of Wayne is the greatest American rock band are nuggets of insightful social and political commentary. One Eve 6 tweet from six hours ago reads: “I just feel that if you have a progressive populist platform that could have actual material effect, maybe just maybe you can get racist MAGA morons to vote for policies that help POC and indigenous people if those policies help them too.” And another from yesterday: “The yoga brain to QAnon pipeline is real.”

Like everything that reaches left-of-center Twitter, Collins’ novel social media persona has become an unnecessarily divisive issue among people who fundamentally agree with him and each other. Around Christmas, there was a trend of terminally humorless music writers and tastemakers complaining about the popularity of the account and posting weird, bumptious screenshots of themselves muting or blocking Eve 6. Of course, you’re entitled to mute whoever you want—that’s what makes Twitter better than socializing in the real world—but I fail to see how a gnarled rocker using his platform to advocate social change is anything but noble.