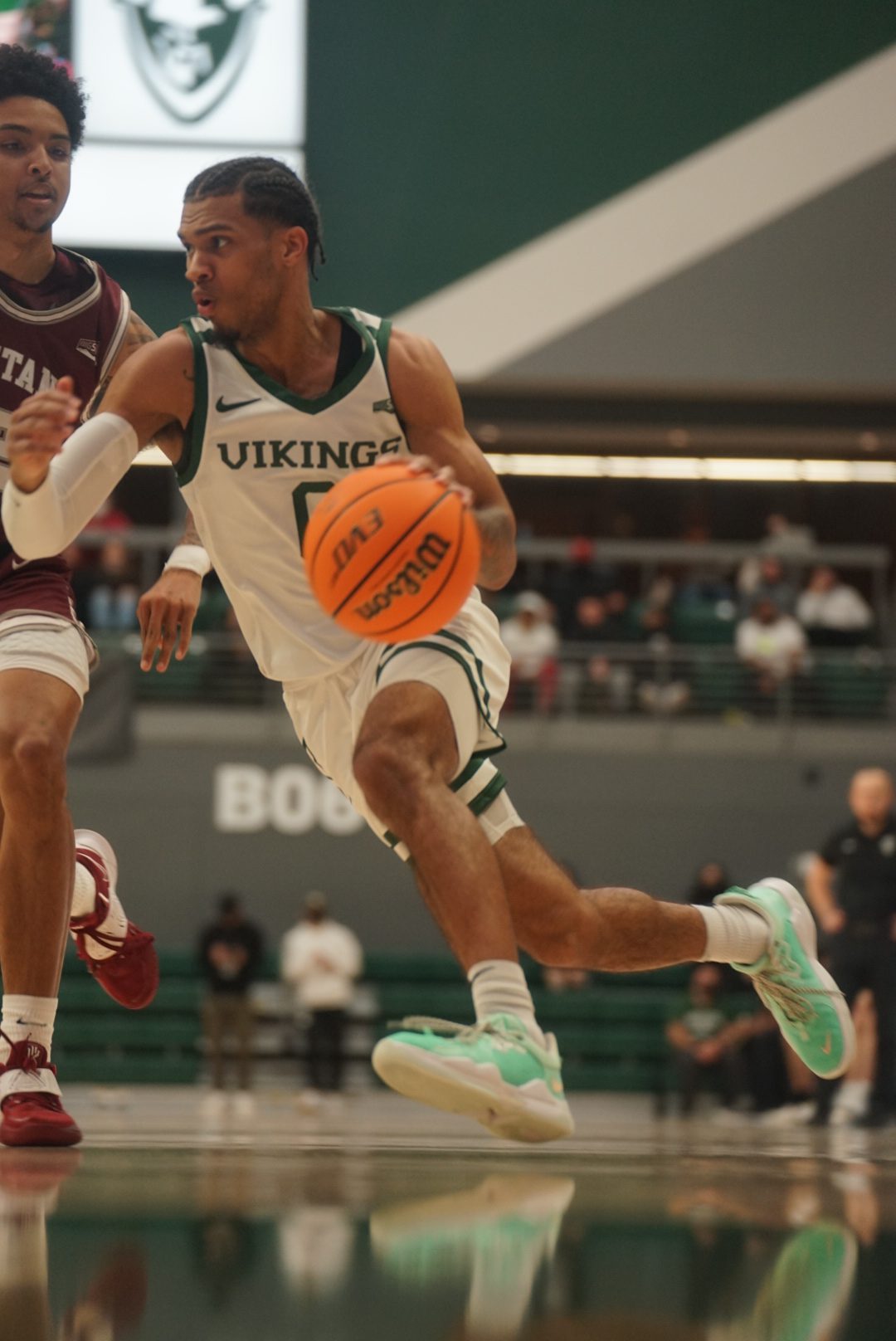 The Viks ended their road trip in Cedar City against the Thunderbirds in a 86-76 loss. Khalid Thomas led the squad with 16 points and went four for nine on three-pointers. Michael Carter III wasn’t far behind with 15 points, going six for 13. James Jean-Marie stays consistent with 10 points, going four for seven and a perfect two for two on the free throw line. Ezekiel Alley also never fails, putting up a season-high 16 points, shooting 5-9 and 4-5 on three-pointers and 2-2 on the line. With nine lead changes and eight ties the whole game, the Viks let Southern Utah get past them in the second half. The Vikings travel back home for a five-game homestretch starting with Montana.

Fans rocked the ship this game with the Viks’ explosive start, holding on to the lead for most of the match. Things got trippy in the last several minutes of the game with five lead changes and seven ties. The Viks couldn’t stop the Griz from coming back, and kept at it until the last second. Montana went on to win this game 66-64 in a nail-biter. Damion Squire finally got play time after missing the first half of this season due to an injury, dropping 17 points on the Griz—shooting seven for 12 and a perfect 3-3 on the free throw line. The team struggled to shoot threes this game, going 1-10 the whole game. Thomas stayed hot, going four for seven with 11 points and three for six on the line.

The Viks couldn’t get it done Saturday against the Bobcats, losing 73-60 after a close game at the half. Jean-Marie put up 12 points for the Viks, shooting 4-10 and 3-5 on the line. Damion Squire went a perfect 6-6 on the free throw line, giving the Viks 11 points. Alley shot 5-10 and 12 points for the Viks. Mikal Starks, earlier in the first half, got a technical foul. The Viks had four ties and nine lead changes throughout the game. Both teams had 27 bench points. Khalid Thomas had a season-high two blocks, and went 3-4 on the free throw line. In just 13 minutes, Trey Wood shot 2-2 and shot a free throw, making five points.

The Viks traveled to Montana to play their second of five games on the road. Alaya Fitzgerald shot 4-8 and a perfect 4-4 on the free throw line, putting up 12 points for the traveling Viks. Esmeralda Morales and Savannah Dhaliwal both put up 11 points with Morales going 2-3 on the line, and Dhaliwal shooting 5-11 with five rebounds. In only nine minutes of playing time, Jenna Kilty went 2-3 in both field goals and three-pointers, producing six points. Montana had four of their players score 12 points—or more—to win the game 93-57 as the Viks left Missoula and traveled to Bozeman in their next competition against the Montana State Bobcats.

The Viks struggled offensively against Montana State on Jan. 22, dropping the game 71-56 with the Bobcats maintaining the lead for 36 of the 40 minutes. The Vikings have been outscored 164-113 on this Montana road trip. The Viks this game had a 27% field goal percentage, going 14-52. Jada Lewis led the team shooting 6-9 and 5-7 on three-pointers and 18 points. Alaya Fitzgerald went 1-8 but a perfect 6-6 on the line with 8 points. Dhaliwal had 10 rebounds that game, leading the team. Mia ‘Uhila—in just 18 minutes of playing time—went 5-6 on the line, giving the Viks 7 points. The Viks that game had 17 turnovers compared to the Bobcats’ 10.

Both men’s matches against Oregon on Jan. 17 and Portland on Jan. 19 have been canceled due to COVID-19 protocols, and the next match will be the home-opener against George Fox University on Feb. 11. The home-opener for the women’s team is Jan. 28 against the crosstown rivals, University of Portland.

Softball: Run It Back, 2022 Schedule Release

The schedule for the 2022 softball schedule has been released for the reigning Big Sky champions. The season opener starts Feb. 11 in Riverside, California at the Lynn Russell Miller Classic, facing off against teams like Utah Valley, Pacific and UC Riverside. Then the ship travels to Tempe, Arizona for the Littlewood Classic with UC Berkeley, Arizona State, University of Texas, El Paso and Illinois State. Youngsville, Louisiana is home to the Mardi Gras Mambo, where the Viks play Southeastern Louisiana, Louisiana Tech, University of Louisiana, Nicholls and Northwestern State. The first home series for the Viks will be Mar. 4 in a three-game series against Robert Morris University. Soon after is the Oregon/Oregon State Invite, playing North Dakota State and our state rivals, Oregon and Oregon State. Corban and Pacific come to Viking territory starting March 16 in a three-game series—before conference play begins Mar. 26 against Montana.

The 2022 Big Sky Championships will be held in Ogden, Utah, starting May 11 with the Viks looking to defend their title. The Viks finished their 2021 season 15-26 and 8-10 in conference. They won the Big Sky Championships last year which punched their ticket to the NCAA softball tournament for a chance to compete and win the Women’s College World Series.

There are currently two athletes in Portland named Damion with the number zero on their jersey. One is Damion Lillard of the Trailblazers—and the other is junior guard Damion Squire of the Vikings. Damion Squire was a transfer from UC Davis, before coming to compete for the Viks his junior year. Unfortunately, he had a hip injury that caused him to sit out of the first 11 games of the season. In his first game as a Viking, he went 3-3 and earned seven points in just 15 minutes to give the Viks a conference win over Sacramento State on Jan. 15. The Canadian had his season-high as a Vik in the back-and-forth game against Montana with 17 points, shooting 7-12.

The junior guard from Rocklin, California had a day on the road against Montana State on Jan. 22 with 18 points. She shot 6-9 and an impressive 5-7 on three-pointers. Lewis has a .398% three-point field goal percentage this season, and currently averages 10.4 points per game. She’s also a perfect 10-10 on free throws, never missing one this season. Wearing #23 on the court, Lewis had her season-high points against Prairie View, with 23 points in November. Catch her at the next Viking home game when they play Northern Arizona on Jan. 29. 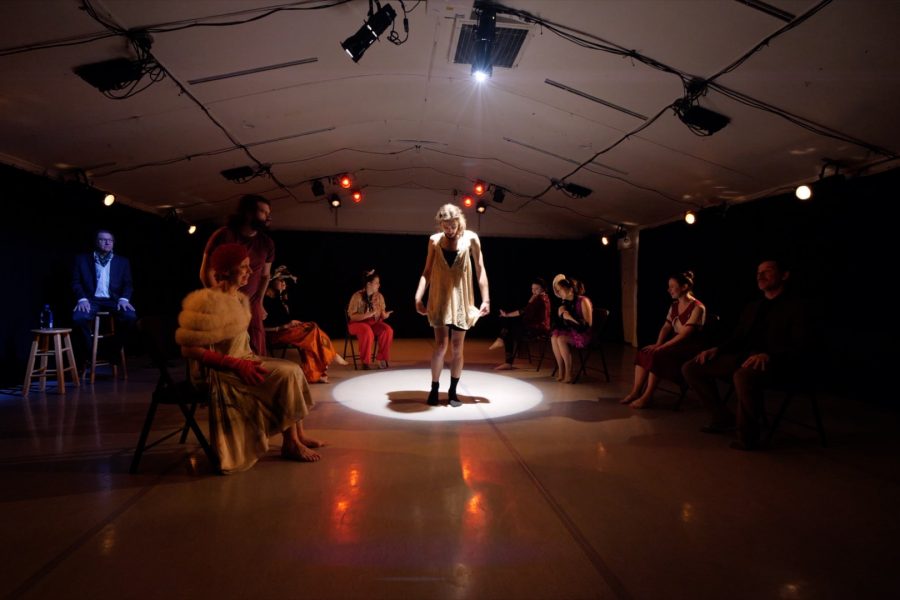 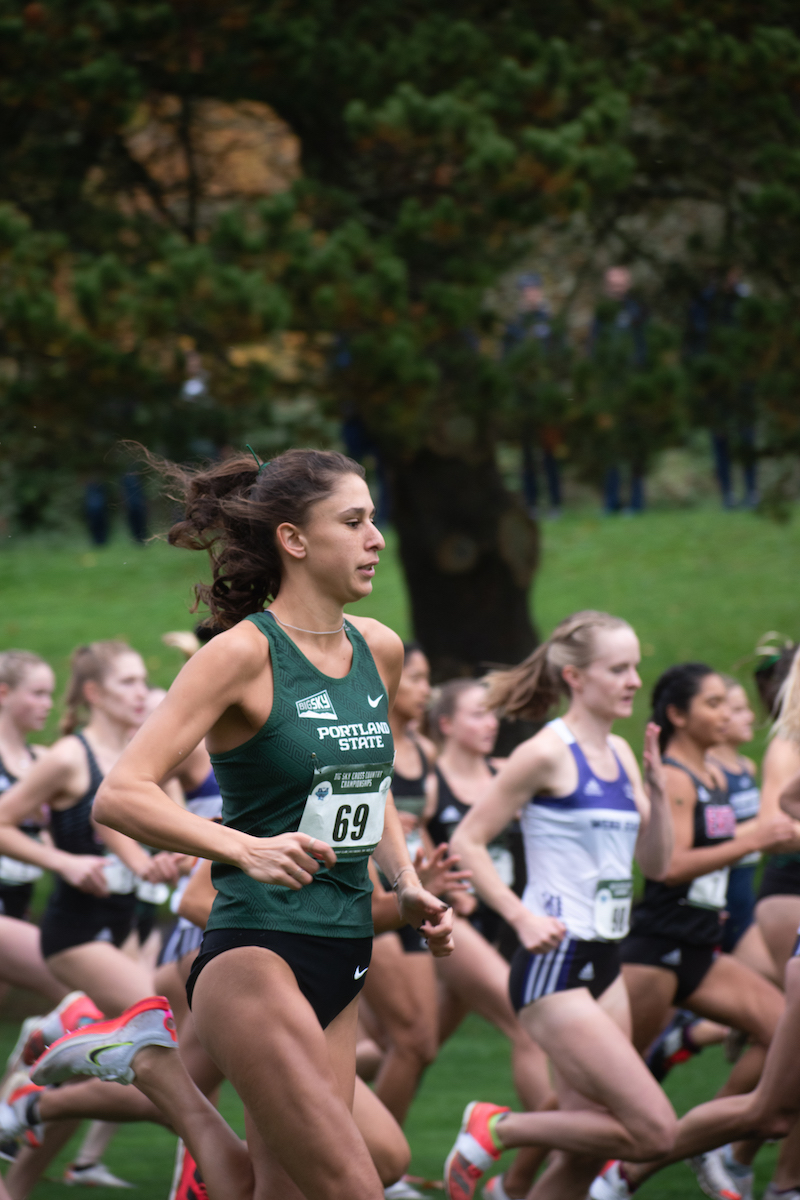 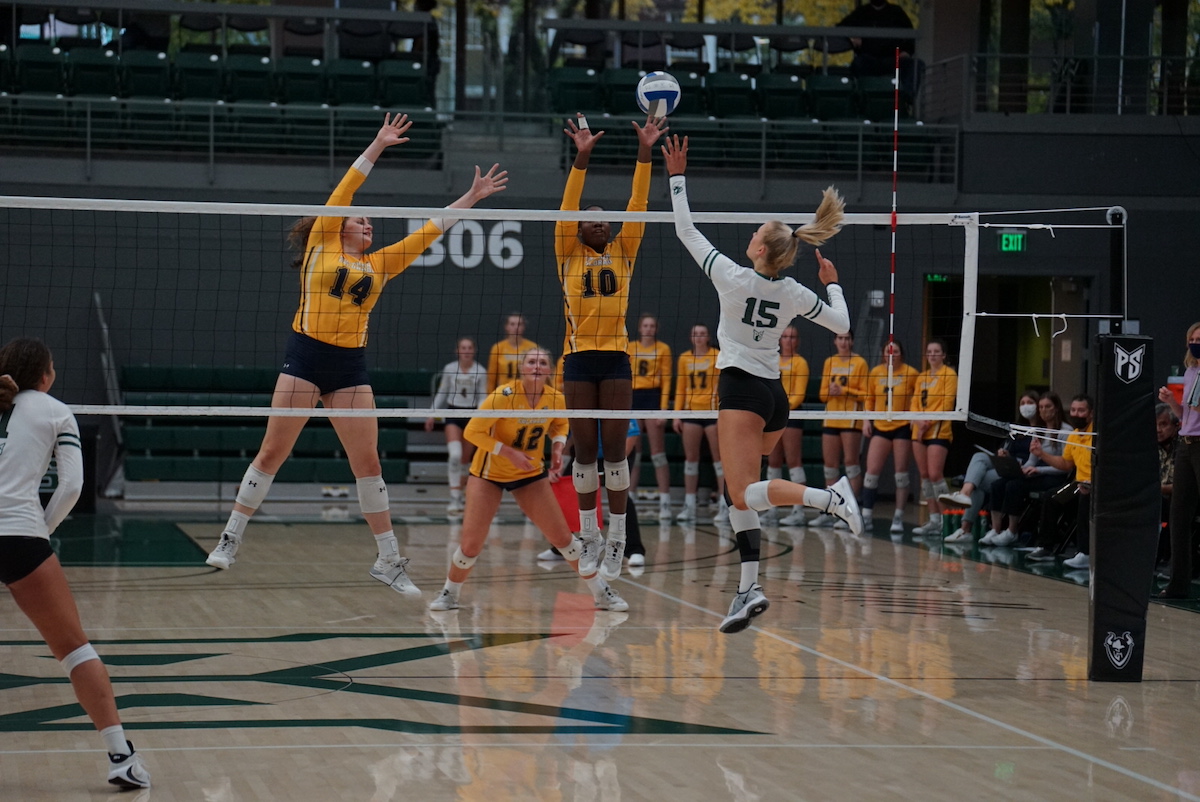 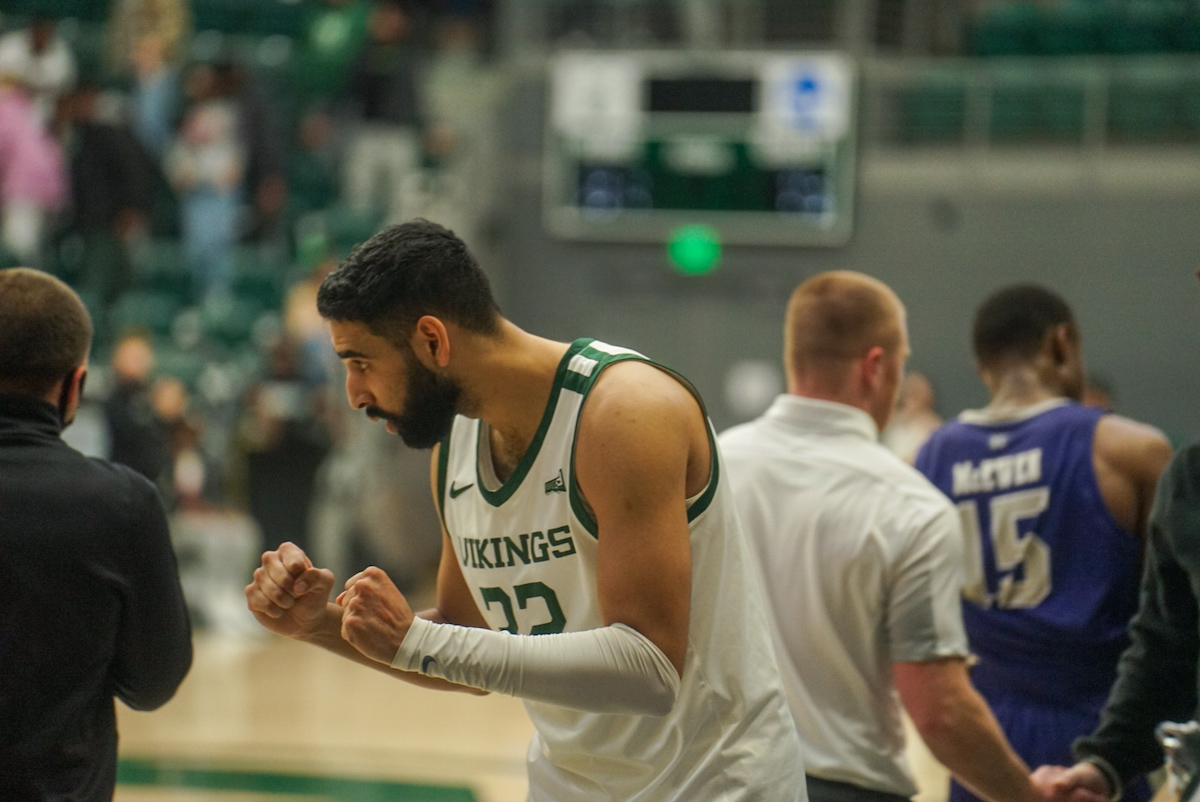