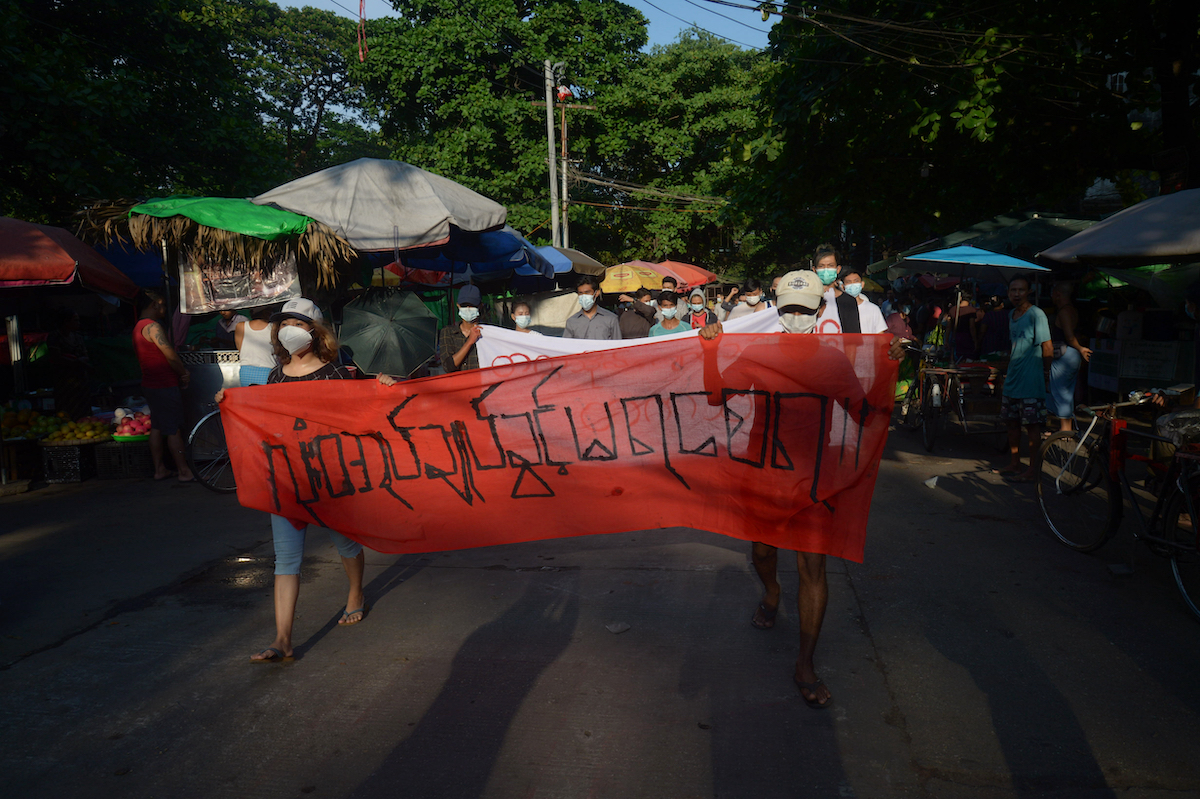 Massive protests have taken place across Myanmar since the military seized control on February 1. Elected leader Aung San Suu Kyi and members of her National League for Democracy (NLD) party are among those in custody while hundreds of people, including children, have been killed, according to AP News.

The Assistance Association for Political Prisoners confirmed a total of 701 civilians killed by security forces as of April 10—though the watchdog group warned the true toll was probably significantly higher.

Nations the world over have condemned these actions since the military’s takeover, as have international organizations such as the United Nations.

“The shameful, cowardly, brutal actions of the military and police—who have been filmed shooting at protesters as they flee, and who have not even spared young children—must be halted immediately,” they wrote in a joint statement issued on March 28.

“We must ensure accountability for past crimes and deter the most serious international crimes from being committed,” the statement continued. “The failure to address the atrocity crimes [sic] the Tatmadaw has committed in the past, including against Rohingya and other minorities, has brought Myanmar to this terrible pass. There is no way forward without accountability and fundamental reform of the military.”

Myanmar, also known as Burma, has suffered decades of repressive military rule and poverty due to years of isolationist economic policies, and brutal civil war between ethnic minority groups.

The country’s longtime opposition party—the National League for Democracy (NLD), led by Aung San Suu Kyi—won majorities in both the chambers of parliament in 2015, and several foreign governments and corporations that had previously spurned Myanmar began participating with it.

But the military, known as the Tatmadaw, has continued to dominate many aspects of civilian life. Military and civilian leaders, including Suu Kyi, have also faced international criticism for ongoing human rights abuses and ferocious violence against Rohingya Muslims in the western state of Rakhine, which a U.N. report stated were committed with “genocidal intent.”

Myanmar has been ruled by a military junta for many of the years since it gained independence from British colonial rule in 1948. The Union of Burma began as a parliamentary democracy, like many of the newly freed nations on the Indian subcontinent.

However, democracy only persisted until 1962, when General U Ne Win led a military coup and maintained power for the next twenty-six years.

Ne Win instituted a new constitution in 1974 based on an isolationist policy and socialist economics which essentially nationalized Burma’s primary industries. The economic condition declined swiftly, and a black-market economy took hold.

By the year 1988, food shortages, intense wealth inequality and institutional corruption in both business and government, protests began and the army responded to the protesters, killing at least three thousand and displacing many thousands more.

In the aftermath of the 1988 clampdown, Ne Win left as chairman of his party, although he actively continued behind the scenes as another military junta took control.

The junta pushed forward a new constitution in 2008, which is still in place today, which gave the military extensive powers despite civilian rule.

President Thein Sein spearheaded a series of reforms, including granting amnesty to political prisoners, relaxing media censorship, and implementing economic policies to encourage foreign investment. And then came the aforementioned 2015 elections, which were touted as the fairest in many decades.

However, many argued that the 2008 constitution gives de-facto control to the military, over the entirety of Parliament. The constitution contains several provisions to safeguard the military’s dominance.

That power was threatened in the 2020 elections in Myanmar, with the NLD taking yet another landslide victory. The Tatmadaw even used the constitution in place as an excuse for the seemingly inevitable coup taking place in Myanmar today.

Two months after the coup, the military remains in power and 2,741 people were detained in relation to the coup.

“When the coup council who have been committing crimes announces you as a lawbreaker together with the whole country, you will be more than happy because you are recognised as a hero in this revolution,” wrote Sithu Aung Myint, a journalist put on the military’s wanted list, on Facebook, according to Reuters. “Your next generation will be proud of you.”

Amid military efforts to bar protests, such as internet shutdowns and issuing arrest warrants for those who speak out against the military rule, people across the world have spoken out in support of the protesters.

“The people of Myanmar find themselves once against facing the military’s bullets, but they courageously continue their struggle, unrelenting,” wrote Lotte Leicht, EU director at Human Rights Watch, and Brad Adams, executive director of the Asia Division of Human Rights Watch, in a letter to the EU on April 8. “Myanmar’s junta needs to be shown there are both immediate and longer-term consequences for their grievous crimes.” 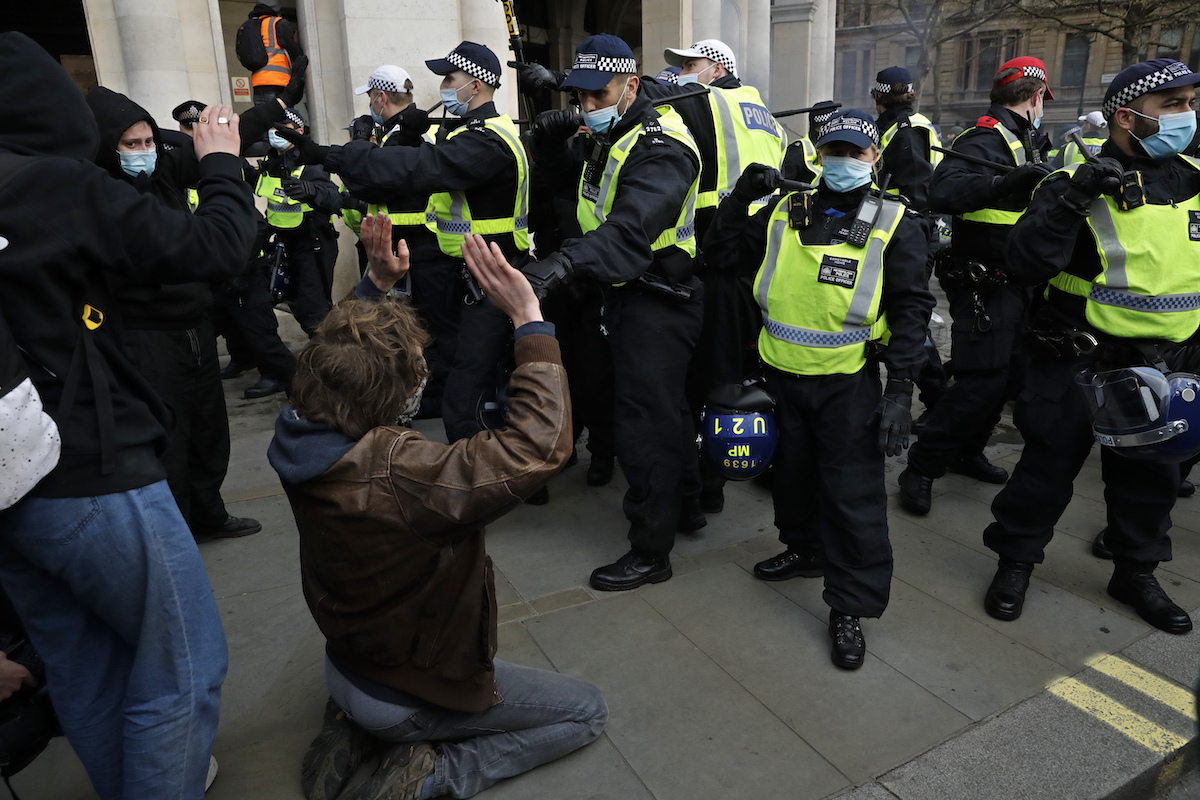