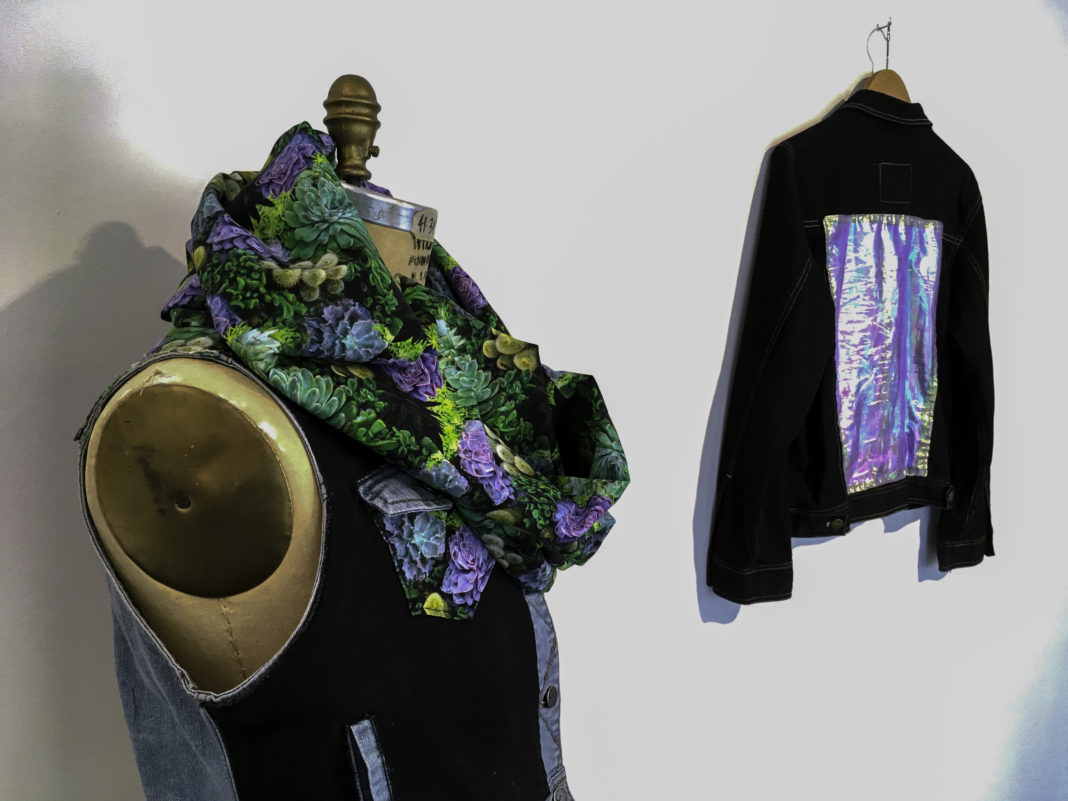 PSU student Courtney Gallardo presented the collection “Survival //,” which represented a designed focus on outdoor survival. “Survival //” was reminiscent of festival attire, such as the apparel worn at Burning Man. Shredded skirt layers, vibrant earthy tones, burlap netting and succulent patterned fabrics were incorporated into a denim vest and a scarf, which inititially hid the details of the vest. Once uncovered, the vest appeared to be inside out at first. Overall, the vest was a win connected to Gallardo’s other piece in the show, “Not) Enough,” a jean jacket that looked to non-function, or solely as an aesthetic, upon first glance. Gallardo’s second vest piece was adorned with a large full-back patch of iridescent purples that played tricks on your eyes while glancing back and forth.

Upon closer inspection, the patch was embroidered under a net with text that read, “simply telling girls they can say ‘no’ isn’t enough.” This subversion of a futuristic, space-punk denim jacket being transformed from residing in a space of future-fun into a powerful societal statement is part of what makes the work interesting. In both the aesthetics and the message, Gallardo tells us to dig deeper.

The event also featured a sweet bomber jacket with floral print sleeves, a collection of what appeared to be renaissance fair warrior tunics, and a selection of cosplay costumes. PSU student Andra Mahusen presented a skirt and a fitted gray dress shirt, evoking the image of a mega-corporate employee’s wardrobe in a future dystopia. Mahusen’s aesthetic was reminiscent of ‘60s mod but with the pixelated effect of 1980s cinema.

A small shelf on one side of the exhibit presented two creepy dolls. One of the dolls, Olive, had a Nightmare Before Christmas vibe going on, while the other doll was missing a face altogether, which was definitely creepier. Next to Olive was a small, cute faux-taxidermy owl made of fabrics, which appeared to be dead because of the x’s placed over its eyes. Mindy Marler presented the doll “Scarlet,” which wore a wonderful, geometric patterned white nightie. Hadley Yoder’s doll sized apparel was featured across the shelf as well. To the left was Yoder’s “Down the Rabbit Hole Coat,” a sharp blue coat perfect for being fancy on a train in the 1800s.

The next wall featured Mike Rutherford’s summer outfit for the Kinfolk craftsman: tan shorts and a striped shop-apron. Next to Rutherford was Liz Wanderer’s abstract art piece composed of pastel upholstery foam. Wanderer’s work was very pleasant from afar, but as I got closer, I wished I hadn’t. The pieces of foam are held together with copper wire and human hair. Anxiety. It was as though the girl from Drop Dead Gorgeous began the new hobby of upholstering and lost it her mind in the process. Juxtaposed with the Kinfolk craftsman apron, suddenly Rutherford’s collection appeared to be one of a Kinfolk serial killer.

Also featured: lo-fi videos of people comedically hang out, performing gross stunts, or just chillin, drinking and smoking. Bilyeu’s “Drawstring Pants” seemed wildly flexible: I could picture them at a yoga class; on Gwen Stefani during the “Banana” times with Harajuku; on a dude smoking weed, watching Hot Fuzz, and eating pizza; or even with Gallardo’s “Survival //” during festival season.

Liz Wanderer had two more pieces in the center of the room, one resembling a vinyl Loch Ness monster swimming in the cool-gray floor, while the other looked like a hybrid of Disney’s Cheshire Cat and Kaa with a massive circle of striped upholstered tube. Both of Wanderer’s  pieces were fun to observe.

Overall the show felt largely like a break from backstory, nuanced social roles and societal tragedies. Where objects are there purely for the enjoyment of the viewer. Most importantly, though, “Fabric & Form” represented PSU’s talented textile designers whose abilities are truly gifts to us all. 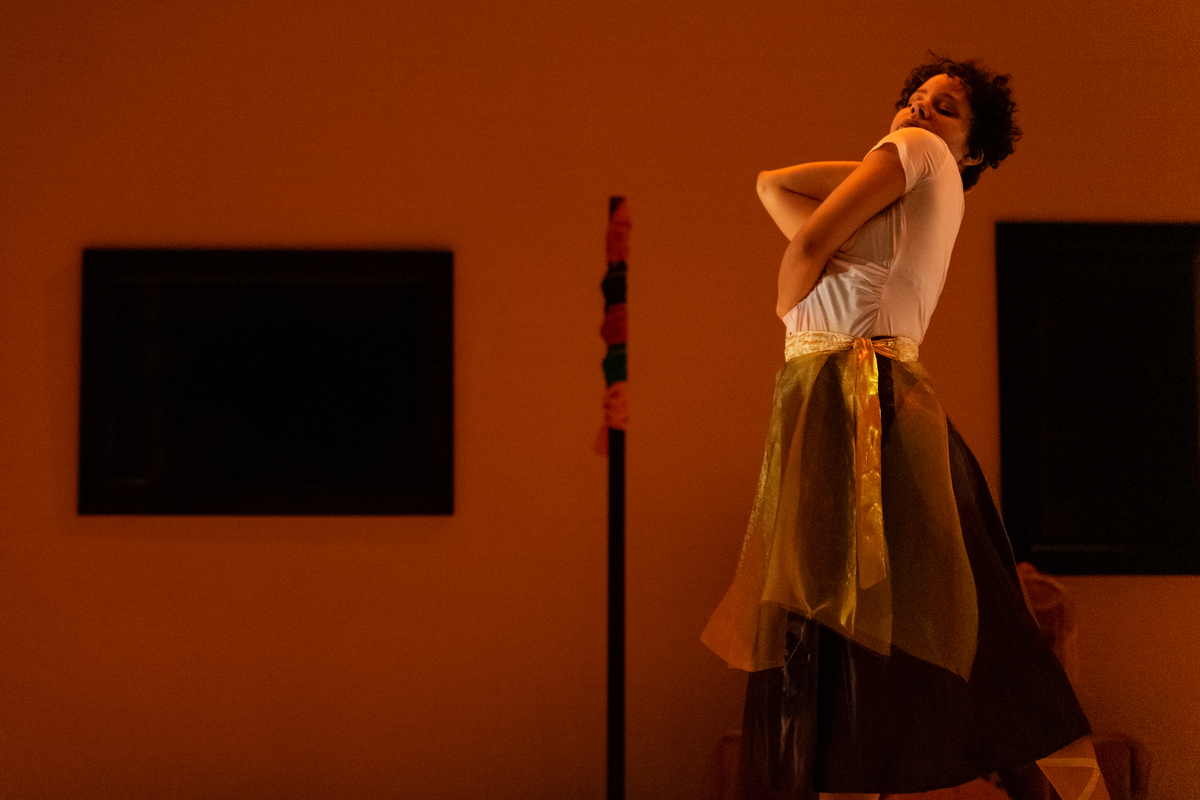 Bethany Harvey's dynamic performance in (Un)easy was an intimate experience, drawing the crowd into the private space of someone who is broken and despondent, and watching their journey into acceptance and confidence. Alex Wittwer/PSU Vanguard