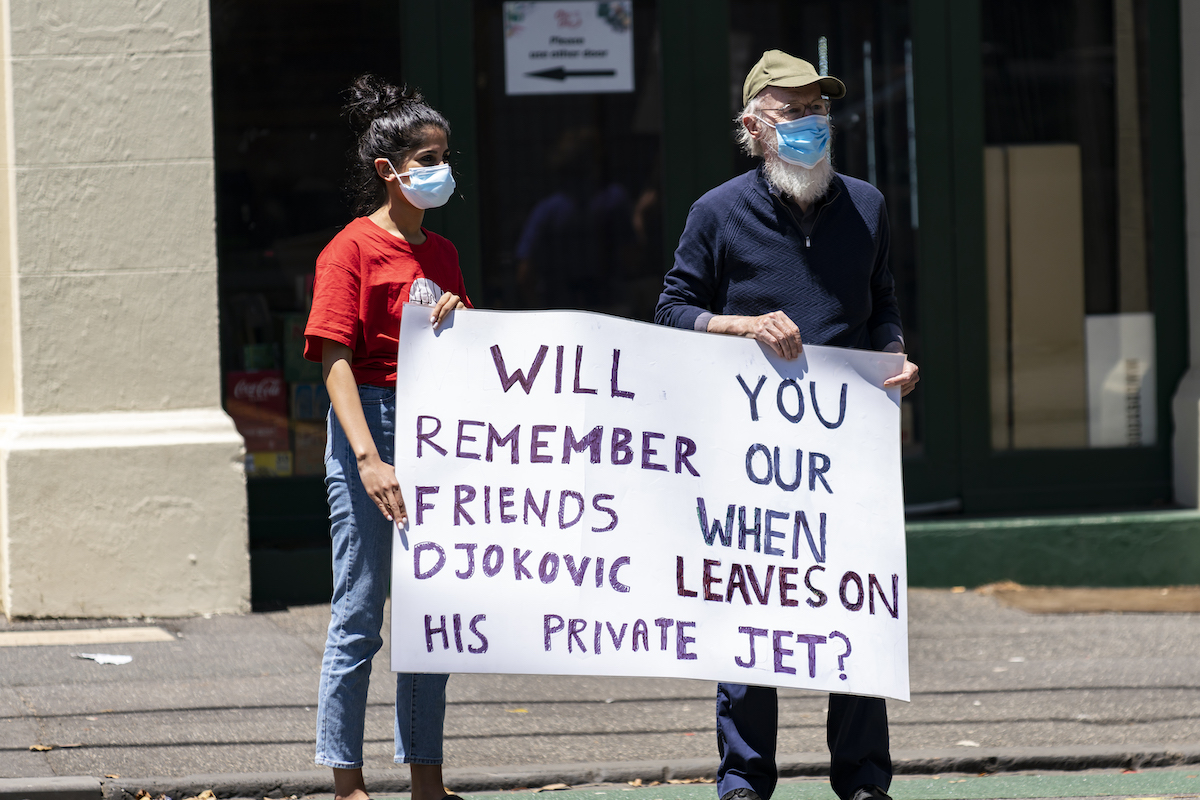 Protestors outside the Park Hotel detention facility in Melbourne. Courtesy of Matt Hrkac

#1 tennis player Novak Djokovic announced his eligibility to defend his title in the Australian Open in Melbourne on Jan. 4 by sharing that he had been approved for a medical exemption from a COVID-19 vaccine, as reported by Reuters.

This followed speculation that he would be unable to compete due to Australia’s quarantine rules. Djokovic’s exemption was reviewed by the Independent Medical Exemption Review Panel appointed by the Victorian Department of Health as well as another independent medical specialist before approval from Victoria’s state government.

Djokovic contracted COVID-19 in Dec. 2021, and provided documentation of his infection before and after travelling, but British doubles player Jamie Murray questioned Djokovic’s exemption.

“If it was me that wasn’t vaccinated I wouldn’t be getting an exemption,” Murray said. He did, however, express support for Djokovic. “Well done to him for getting clear to come to Australia and compete.”

Australian Prime Minister Scott Morrison faced severe backlash over the government granting Djokovic a medical exemption—prior to Djokovic’s detainment—and responded by stating his ability to compete was not fully settled.

“We await his presentation and what evidence he provides us to support that [exemption],” Morrison said. “If that evidence is insufficient, then he won’t be treated any different to anyone else and he’ll be on the next plane home. There should be no special rules for Novak Djokovic at all. None whatsoever.”

Several others criticized Djokovic for staying quiet about his vaccination status prior to announcing his medical exemption. Sam Groth, a retired Australian tennis player, said that “Novak Djokovic being granted a medical exemption to play the Australian Open is a decision that spits in the face of every Victorian and Australian.”

According to Reuters, Djokovic’s ability to compete in the Australian Open went into question again on Jan. 6 after he was stopped on arrival at the Melbourne Airport and denied entrance to the country, due to the fact that his team had applied for a visa that does not allow medical exemptions. Djokovic was confined to a hotel designated to hold immigrant detainees while his lawyers fought with the Australian government for his ability to enter the country.

The Australian government has drawn criticism for their detainment of the tennis player. Serbian President Aleksandar Vucic called the actions “harassment.”

“The whole of Serbia is with him and that our bodies are doing everything to see that the harassment of the world’s best tennis player is brought to an end immediately,” Vucic said.

Both Djokovic’s mother and father, Dijana and Srdjan Djokovic, spoke out against his detainment.

“They are keeping him as a prisoner,” his mother said. “It’s not fair. It’s not human.”

“If they don’t let him go in half [an] hour, we’ll gather in the streets, this is a battle for everyone,” his father said to Serbian news outlet Sputnik. “I have no clue what’s going on, they’ve kept my son in captivity for five hours now.”

On Jan. 9, the Australian government stated that guaranteed assurance of entry by a non-citizen into Australia does not exist, rather, there are criteria and conditions for entry as well as reasons for refusal or cancellation of a visa. The government agreed not to deport Djokovic until a court hearing which was held on Jan. 10.

These court proceedings did not go without commotion and interruption. Fans and supporters of Djokovic protested his detainment outside his lawyer’s office and outside the Federal Court of Australia. The fans surrounded a black car believed to be transporting Djokovic, stopping it in the street and banging on the windows while chanting, “Free Novak! Free Novak!”

At one point police targeted the crowd with pepper spray.

Djokovic’s court hearing was held virtually due to COVID-19 restrictions. Although it was originally intended for the public to be allowed to watch as it happened, these plans quickly deteriorated. The court shared a Microsoft Teams link days prior to the hearing, but then shared a new link afterwards. The original link led reporters and the public to a stream of pornography and techno music, which was being streamed into the meeting by hackers.

“We’ve had techno blasting, giggling, shouting and someone is just saying ‘Nole’ repeatedly in a pained voice,” said Australian journalist Sarah Dankert according to Reuters.

The updated link led visitors to a crashed website from over-visitation. Due to the extreme levels of interference, the court later published a full transcript of the hearing as well as sharing a link to a YouTube video four hours into the hearing—right before the final ruling.

Djokovic won the court case, and was officially allowed to enter the country. Judge Anthony Kelley ruled the Australian government’s decision to revoke Djokovic’s visa was “unreasonable” and ordered his release from the hotel in which he was held.

“I am pleased and grateful that the judge overturned my visa cancellation,” Djokovic tweeted.

The final ruling was met with controversy, with some tennis players such as Spanish player Rafa Nadal sharing that he believed it was the fairest decision. But not everyone agreed.

“If he plays, the booing will be deafening,” said former American player Pam Shriver.

On Saturday Jan. 15, Djokovic was held for a second hearing. Three judges unanimously agreed to uphold the Australian Government’s decision to cancel his visa. The tennis star boarded a plane out of Australia on Sunday, unable to defend his title in the Australian Open.

Protestors outside the Park Hotel detention facility in Melbourne. Courtesy of Matt Hrkac