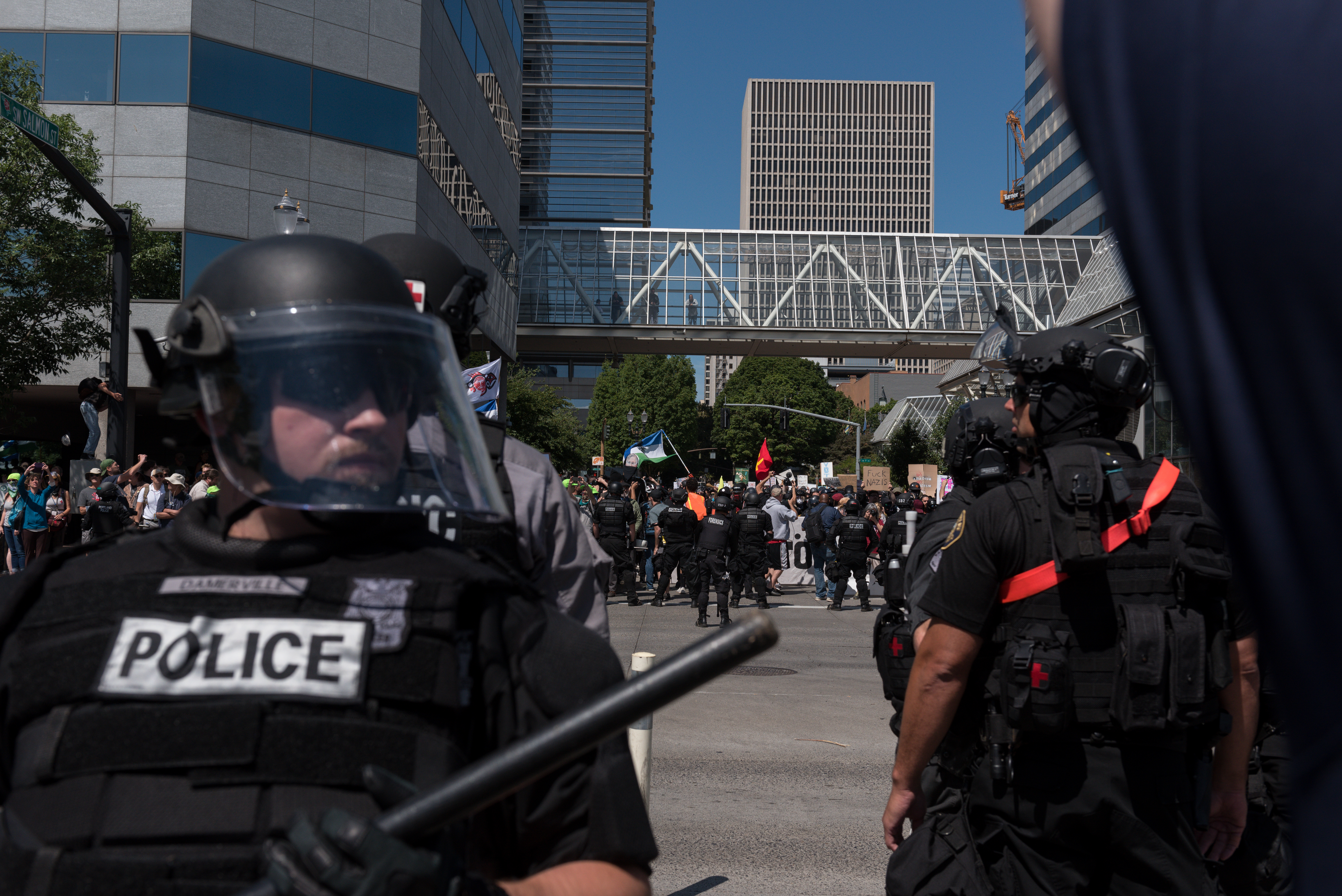 A rally held in Portland by alt-right groups Patriot Prayer and Proud Boys ended in a brief bout of mayhem on Saturday, Aug. 4 as the Portland Police Bureau turned to methods of crowd dispersion that have since been the subject of national controversy.

Patriot Prayer had originally planned to hold its rally at Terry Schrunk Plaza—the starting point for its previous Portland rallies—but changed the venue to Tom McCall Waterfront Park a week prior. This move was largely attributed to Patriot Prayer’s desire to open-carry firearms during the event, which would have been prohibited at Terry Schrunk Plaza, as it is federal property.

The Southern Poverty Law Center warned the event could result in potentially deadly violence, similar to the Charlottesville rally in August 2017 where a right-leaning rally member drove a car into a crowd of counterprotesters, injuring 19 and killing one.

The anticipated clash between Patriot Prayer and counterprotesters led Mayor Ted Wheeler to take many preemptive measures, including a dog-led sweep for explosives prior to the start of the event and two separate weapons screening stations. These stations only seemed to affect those who could be visibly identified as being part of the rally, leading to many passers-by walking through the stations without being searched. PPD confiscated many weapons and posted photos on their Twitter.

The rally began around 10 a.m. on Saturday, August 4, with over 100 members of Proud Boys, Patriot Prayer and various media assembled at Salmon Street Springs as a large group of counterprotesters assembled around City Hall. About an hour after the group at Salmon Street Springs had assembled, several hundred counterprotesters—including people identifying as antifa—arrived via Salmon. Around noon, Joey Gibson and another group of Patriot Prayer members arrived. Their tardiness to the event was attributed to several road closures in effect on the day of the rally.

Upon their arrival, the size of the event—Patriot Prayer/Proud Boys and counterprotesters combined—had grown to nearly 1,000 people, not including the dozens of heavily armed member of the Portland Police Bureau present to keep the groups separated. It was at this point that the PPB ordered those who were present to stay out of the street and declared that nobody was permitted to cross from one side of Naito Parkway to the other.

The rally continued for two hours. The Patriot Prayer/Proud Boys group would move down north or south by a block or two, only to have their movements mirrored on the other side of Naito Pkwy. by the protesters and, as a result, by PPB. Minor skirmishes occurred when members of either side would manage to find their way into the opposing group, but these instances were quickly quelled by PPB.

At around 1:30 p.m., the Patriot Prayer/Proud Boys rally had gone south under the Hawthorne Bridge, causing the group of counterprotesters to assemble west of the intersection of Naito Pkwy. and Clay St. When the counterprotesters arrived at this location (directly south of the Portland Waterfront Downtown Marriott), the PPB announced that everybody west of Naito Pkwy. was to immediately vacate the area.

After five minutes—and after several projectiles were launched toward the riot police—PPB started deploying flashbang grenades in mid-air and smoke grenades on the ground in order to force the group to scatter. Antifa began to throw smoke grenades and tear down tree branches, construction scaffolding and anything else handy in order to form makeshift barriers in the street. Dozens of riot police charged forward using their batons to forcibly clear the area. This process continued as the PPB cleared the counterprotesters one block at a time.

Several protesters and some local journalists received injuries, mostly associated with riot control devices such as rubber or foam ammunitions and flashbang grenades, which were referred to by the PPB as “aerial distraction devices.” Protester Michelle Fawcett suffered third-degree burns and soft tissue damage on her arm and chest after being struck by one such device.

Some people sustained minor injuries—small cuts and bruises—from trips, falls and accidental trampling that occurred while counterprotesters fled following the deployment of the flashbang grenades. Those individuals were treated by volunteer field medics. Additionally, a protestor who wished to remain anonymous was hit in the back of the head with a flashbang grenade. The protester was wearing a helmet which was pierced by the projectile. In the ER, he was treated for lacerations and a concussion.

Four individuals were arrested at the rally and faced charges including harassment, reckless endangerment, unlawful use of weapons, disorderly conduct, resisting arrest and attempted assault of a public safety officer.

Following the rally, the Department of Independent Police Review began investigating reports of excessive force and misconduct by the PPB, asking anyone with footage or testimony related to injuries received during the event to come forward. They can be reached at 503-823-0146.

Portland Police Bureau Chief Danielle Outlaw addressed these issues on Monday, Aug. 6 during a press briefing, stating that the PPB only responded with force during the event after projectiles—including glass bottles and rocks—were thrown at police officers. Responding to accusation that the PPB had shown bias in targeting the counterprotesters, Outlaw responded it was “ridiculous for any one group to think that [she] would favor someone who is supposedly associated or allows white supremacists to be a part of their group, just as it is ridiculous for [her] to favor anyone that intentionally comes to bring physical harm amongst other people.” She also said the PPB had to “be neutral and call it down the middle.”

In the wake of the rally, PPB has temporarily suspended the use of aerial distraction devices. When asked why Patriot Prayer and other members of the right-wing rally were allowed to march westward on SW Market St. from Naito Pkwy. without facing similar crowd control measures, Outlaw responded with “That is a good question. I don’t have the answer to that.”

A clause was removed from the second paragraph regarding rally participants’ possession of firearms because Vanguard news staff witnessed protesters carrying firearms.