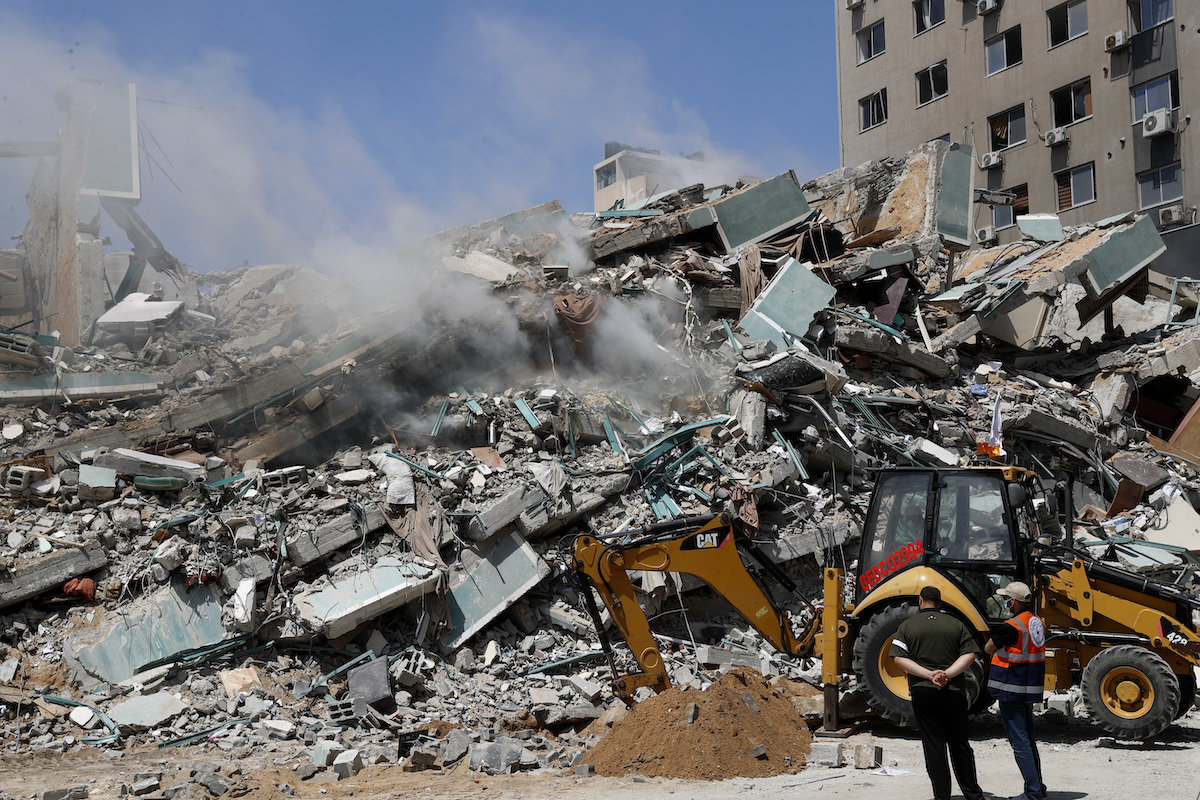 Workers clear the rubble of a building that was destroyed by an Israeli airstrike on Saturday, that housed The Associated Press, broadcaster Al-Jazeera and other media outlets, in Gaza City. Adel Hana/AP Photo

Nearly all media coverage of the situation in the West Bank and Gaza Strip is biased toward Israel and against Palestine—and if you don’t know what to look for, you might never see it.

As news about Israel and the occupied Palestinian territories comes at us from our televisions, our computers and our social media feeds, we may wish to find an “unbiased” source of information; it’s a complicated issue, after all, and the specter of media bias hangs over every contentious topic. But on some issues—such as the situation in Israel and Palestine—media bias clearly goes one way, and it runs deep. Even advocating for Palestinian rights can get one fired from mainstream news media.

According to a 2018 study from 416Labs, a research firm based in Canada, mainstream media such as The New York Times, The Washington Post and others published four times as many Israel-centric headlines as Palestine-centric ones between June 1967–2017. Additionally, Israeli sources were nearly 250% more likely to be quoted than Palestinian sources, and, in Israeli-centric headlines, the use of the word “occupation” has declined nearly 85% since 1967. The use of the phrase “Palestinian refugee(s)” in headlines has also declined by 93% over the 50-year period.

Edward Said, author of Orientalism, notable Palestinian activist and professor of literature at Columbia University until his death in 2003, had the following to say in an interview with the Media Education Foundation: “[The idea] that Hamas terrorists on the West Bank are just interested in killing Jewish children is what you derive from looking at this stuff, and very little attention is paid to the fact that the Israeli occupation of the West Bank and Gaza has been going on for 30 years [now more than 50 years], it’s the longest military occupation in this century.”

It is nearly impossible, he said, “for an American to see on television, to read books, to see films about the Middle East, that are not colored politically by this conflict, in which the Arabs almost always play the role of terrorists and violent people and irrational and so on and so forth.”

The gaming website IGN recently posted an article called “How to Help Palestinian Civilians,” which has since been removed from their website. The article was removed suddenly and without a trace, with no explanation given to IGN staff or the public. Some IGN employees described their coworkers as “pissed” over the decision to take down the article, which promoted Palestinian charities in a manner similar to previous posts on the site about Black Lives Matter, anti-Asian violence and other issues. Dozens of IGN employees penned a letter to management denouncing the decision, making it clear the staff supported the post and calling its removal “a clear instance of corporate overreach [which] demonstrated blatant disregard for the most basic standards of journalistic integrity and editorial independence.” So why was such drastic action taken specifically against an article promoting Palestinian charities and aid groups?

In 2018, CNN contributor Marc Lamont Hill was fired by the network after Hill gave a speech to the United Nations on the International Day of Solidarity with the Palestinian People, saying, “We have an opportunity to not just offer solidarity in words but to commit to political action, grass-roots action, local action and international action that will give us what justice requires and that is a free Palestine from the river to the sea.” The Anti-Defamation League, in a statement on the event, claimed the remarks called for “an end to the State of Israel” and said the annual event “promotes divisiveness and hate.” Despite Hill’s repeated explanations that the speech was a “call for justice” and Palestinian self-determination, his contract with CNN was severed the next day.

For a more recent example, take the case of former Associated Press journalist Emily Wilder. AP News stated in an May 20 article that Wilder “was being terminated for violations of its social media policy that took place after she became an employee,” though AP spokesperson Lauren Easton would not specify exactly “what Wilder had written that violated the policy.”

The article implies—though explicitly does not state—that the tweet in question was one Wilder posted on May 16 where she criticized the invocation of “objectivity” when journalists routinely choose to use terms like “Israel” instead of “Palestine” and “war” instead of “siege and occupation.” This is a pointed critique of media framing, something one would expect from a journalist engaged in critical thinking about their craft. She rightly notes that the choice to use one term over another is oftentimes a political decision. Associated Press admits as such, as they write “the AP Stylebook urges against references to ‘Palestine’ because it is not a fully independent, unified state.” This decision is inherently political.

“There’s no question I was cancelled,” Wilder said in an interview with SFGATE. Her social media presence was first highlighted by the Stanford College Republicans in a Twitter thread full of attacks against Wilder, including an accusation that Wilder had committed blood libel. They later called her an “unhinged, Marxist, anti-Israel agitator.”

Is this the future of media? If one even criticizes the work of other journalists, pointing out systemic flaws and biases in reporting on certain issues, they are liable to be fired? If a student group engages in bad faith attacks against a journalist, their publication won’t even defend them? Is it now acceptable to be fired for a vague breach of social media policy without even being told what you did? And why, as Wilder’s former journalism professor Janine Zacharia noted, was Wilder not simply taken aside and given a conversation with her editor?

Compare Wilder’s story, or Hill’s, with that of CNN host Chris Cuomo. It was revealed in The Washington Post this week that Cuomo had given advice to the governor of New York—his brother—on how to deal with the sexual harassment scandal the governor has undergone. CNN acknowledged in a statement that “it was inappropriate [for Cuomo] to engage in conversations that included members of the Governor’s staff.”

This is surely a breach of journalistic ethics, and a serious one at that. A news host personally advising the governor, his brother, on a political scandal is wildly inappropriate conduct. Yet, Cuomo was allowed to apologize to his viewers on his nightly show, and it seems that he still has a job with CNN. Curious. One wonders why such a serious lapse in judgement garnered dramatically fewer consequences than Wilder’s actions. Why would a junior Associated Press journalist who critiqued the use of language in media face termination, while Cuomo was able to keep his prominent weeknight news show?

The answer, of course, is that Wilder has expressed pro-Palestinian viewpoints in the past, and her critique of media framing was similarly interpreted as pro-Palestinian. Marc Lamont Hill was fired from CNN for similar reasons, after simply expressing Palestinians’ right to self-determination in all of historic Palestine.

And, for what it’s worth, Wilder is right; as Said put it so eloquently in his article “Zionism from the Standpoint of its Victims,” “the dissemination by the media of malicious simplifications (e.g. Jews vs. Arabs)…contributes to the dulling, regulated enforcement of almost unanimous support for Israel.” In other words, if you don’t pay attention, the media can twist your understanding of a situation before you even know what’s happening. 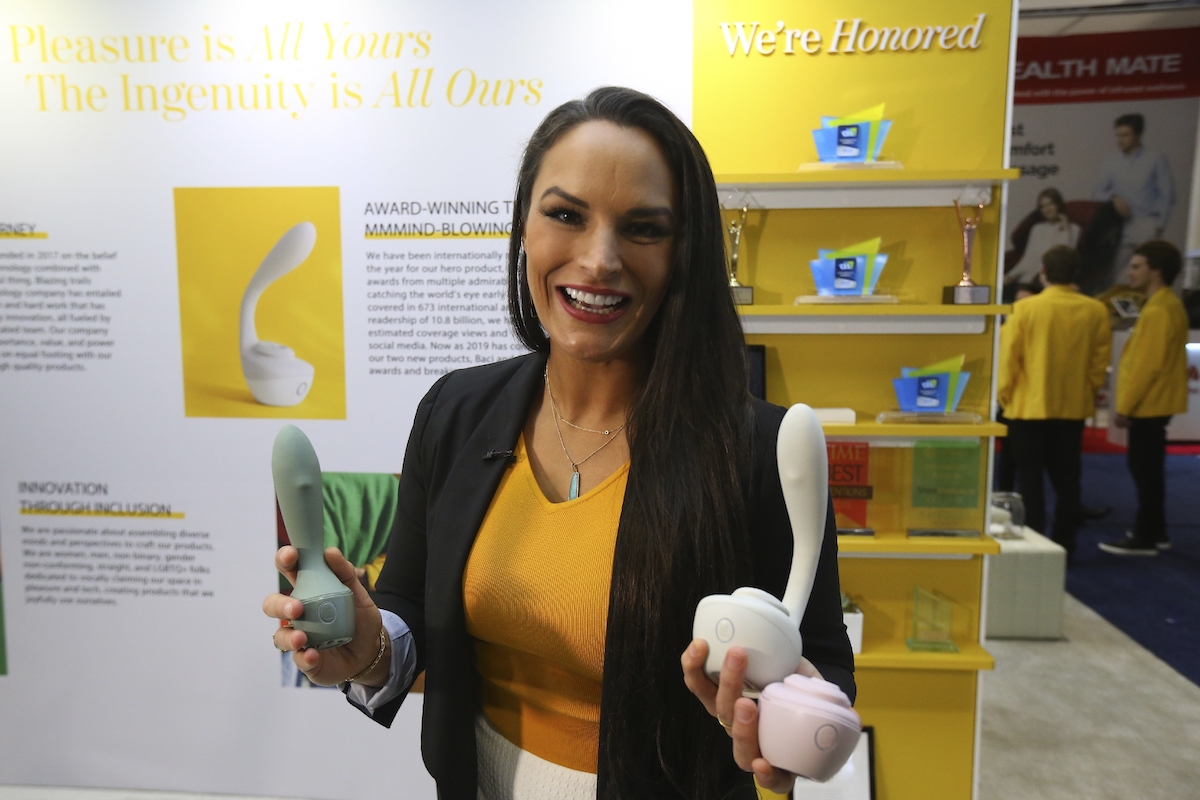 Workers clear the rubble of a building that was destroyed by an Israeli airstrike on Saturday, that housed The Associated Press, broadcaster Al-Jazeera and other media outlets, in Gaza City. Adel Hana/AP Photo