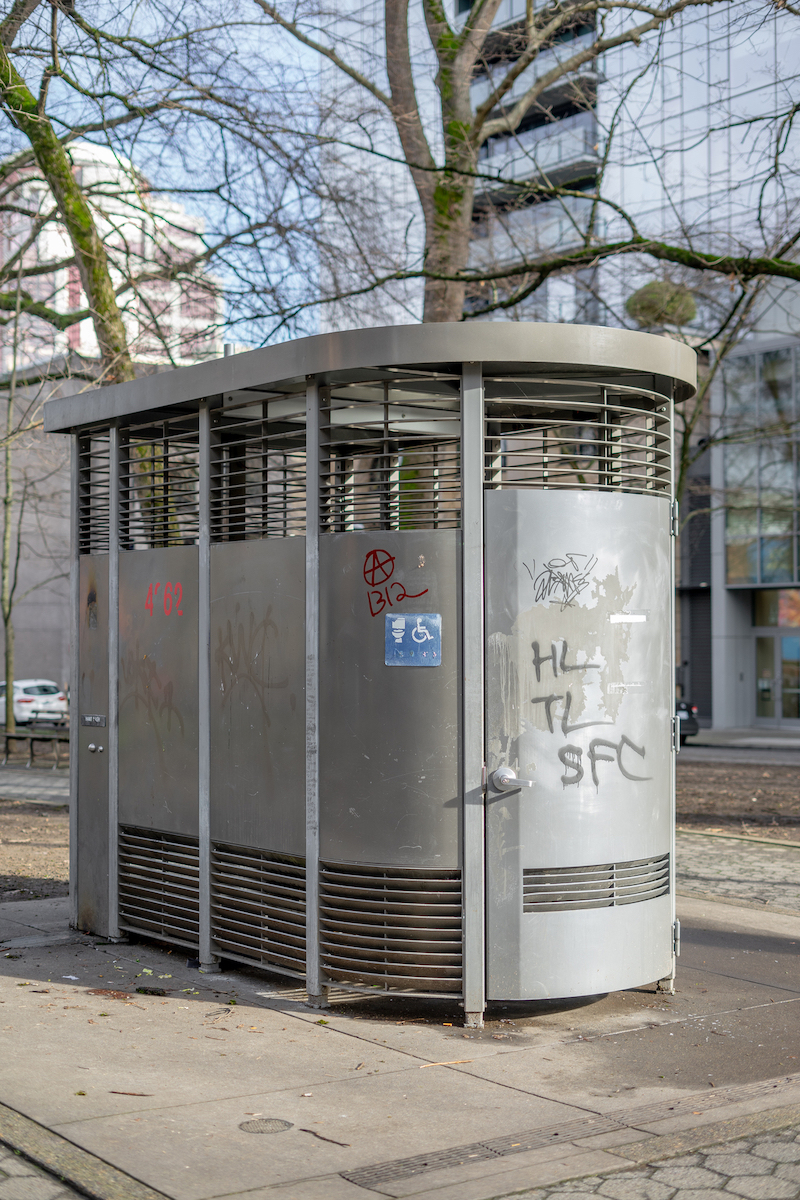 It’s easier to pee in Portland than most cities in the United States. But public restrooms still aren’t accessible to everyone—and the ones that are can hardly be considered dignified. The debate around public bathrooms in Portland, like in most cities, is driven by anti-homeless politics. Everyone needs to use the restroom, and everyone deserves a safe, private, dependable place to go. Unfortunately, Portland has not yet met this goal.

According to QS Supplies, a United Kingdom bathroom wholesaler, Portland has a total of 109 public toilets, or 17 per 100,000 people. That statistic includes all restrooms explicitly available to the general public, including restrooms in public buildings like City Hall and some on the Portland State campus. Compared to cities like New York or Los Angeles—with 4 and 5 public restrooms per capita, respectively—Portland is certainly ahead.

What accounts for Portland’s relative headstart? You’ve probably seen one before: a sleek, oblong stainless steel structure that looks suspiciously like the fuselage of a B-17, sitting in the middle of the sidewalk. I’m talking about the Portland Loo, a metal-enclosed public restroom that can be found in 15 locations around Portland, including one on the South Park Blocks near PSU.

According to Portland Parks & Recreation, there are five Portland Loos open 24/7: one on the North Park Blocks, one on the South Park Blocks, two at the Tom McCall Waterfront Park and one at the original location on NW Glisan and 5th Avenue.

The Portland Loo, a registered trademark of the City of Portland, was first introduced to the city in 2008 by City Commissioner Randy Leonard and Madden Fabrication. It was “designed,” according to the Portland Loo website, “to deter criminal activity and meld into its surrounding environment,” avoiding problems like “vandalism, illegal drug use or prostitution.” Per Portland Loo, “The sleek and modern kiosk discourages crime with graffiti-proof wall panels and open grating that allows you to see if and how many people are inside.”

Reading this language used by the company, the Loo suddenly appears far less appealing. They have described a panopticon.

The implied surveillance permitted by the Loo was made explicit by spokeswoman Anne Hill, who told the Los Angeles Times in 2012, “As you approach a Loo, you can see what’s happening inside. If it’s 2 in the morning and there’s two sets of feet in the Loo, law enforcement has cause to knock on the door and say, ‘Why are there two sets of feet in the Loo? Two of those feet need to come out.’”

Public restrooms are often villainized as hubs for drug use, prostitution, vagrancy, littering, foul odors and any number of other stereotypes associated with the homeless. The Portland Loo, alas, is no exception.

Take Daryl Turner, former president of the Portland Police Association, who told the Portland Tribune in 2011, “that’s Randy Leonard’s crack house right there,” pointing to the Portland Loo on Northwest Glisan in Old Town. Turner, who has been vocal in his disgust toward Portland’s undesirable populations for years, said in a Facebook statement in 2018 that Portland had become a “cesspool,” with “human feces in businesses doorways, in our parks, and on our streets.”

Turner’s comments represent the contradiction at the heart of anti-homeless policymaking—on one hand, critics decry “human feces” in the street; while on the other, they denounce efforts to expand public facilities as hopeless, effective only in providing shelter for drug dealers and delinquents.

Besides the small number of restrooms maintained by the city, Portlanders’ options are limited. The most common restroom facilities nominally available to the public are found in customer-facing businesses, especially restaurants and grocery stores. In a place such as downtown Portland, that means businesses like Whole Foods, Safeway and Starbucks. Most of these establishments have their restrooms locked with a code, and even if non-customers are technically allowed to use the restroom, in practice one usually has to buy something in order to go.

Some businesses are even looking at making the de facto purchase requirement a rule, as with Starbucks C.E.O. Howard Schultz. Speaking to the New York Times’ Dealbook D.C. policy forum in June, Schultz voiced a desire to roll back the company’s 2018 open restroom policy. “We have to harden our stores and provide safety for our people,” he said. “I don’t know if we can keep our bathrooms open.”

Schultz is right about one thing—we can’t rely on private businesses to provide restrooms for the public. That requires a substantial public investment, something that municipalities across the country appear unable or unwilling to do.

A lack of public restrooms can and should be understood as a form of hostile architecture, a form of urban planning designed to exclude certain groups of people from public spaces. Michael Mehaffy, an architect and researcher with a focus on public space, explained to OPB in June that “public space is our commons… and when we start to exclude people, whoever those people are, we’re eroding the public space.” He went on to say that it’s really “not public space if some members of the public can’t use it.”

Anti-homeless activists do not see the homeless population as people, but as criminals. Any effort to provide them with the basic dignity of human existence—such as the right to use the restroom—must be accompanied by an increase in surveillance under the guise of “public safety.”

Nobody should have to pee in a Benthamian psychological prison, and the fact that I have to write these words makes me a bit disgusted. Everyone, no matter their housing status, deserves a discreet and dignified place to go. The first step to taking back the commons is to take back our toilets. 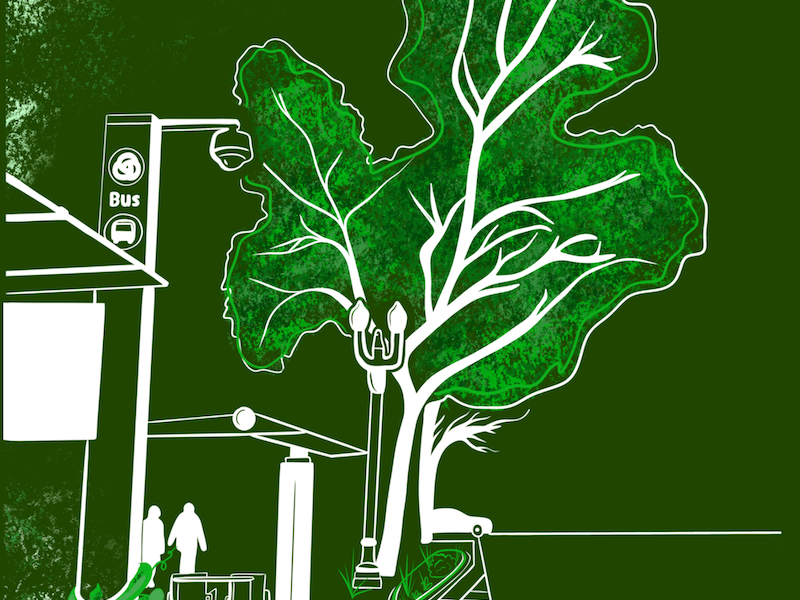 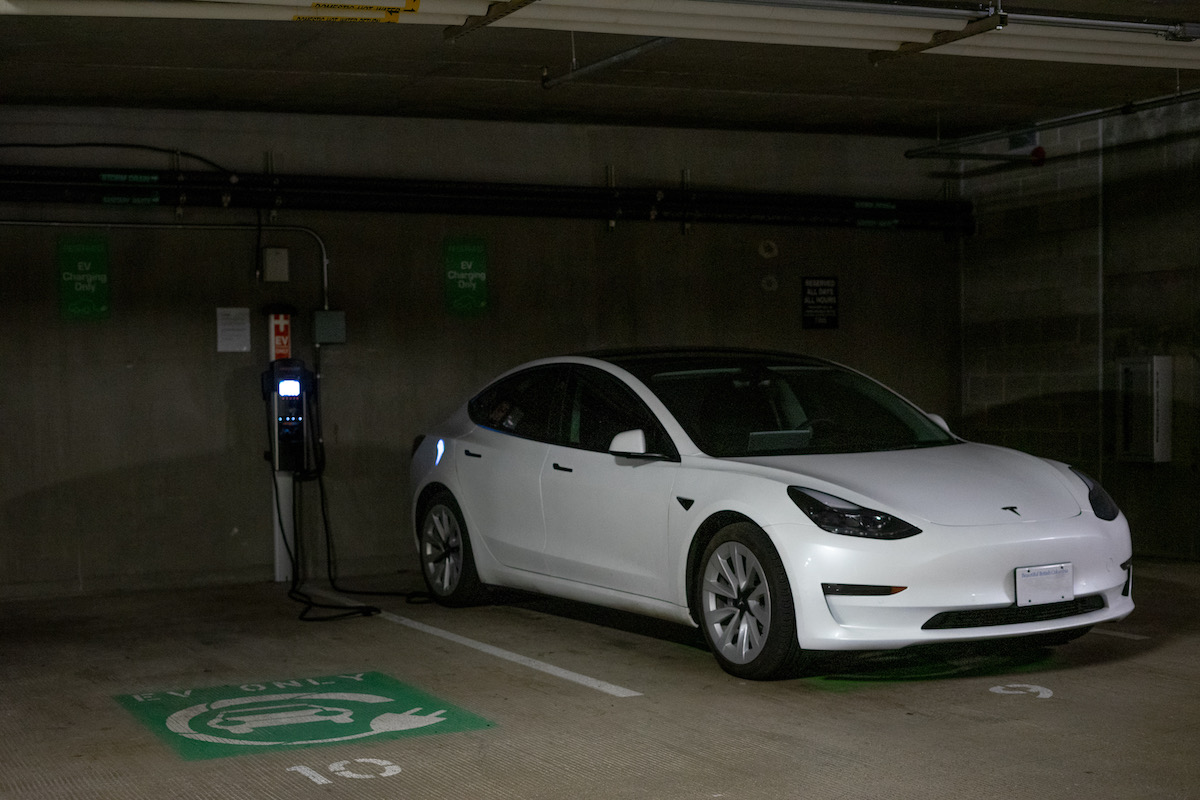 Missing the forest for the EVs