Beyond the Cultural Revolution: [email protected]

Chamber Music NW’s summer festival continues with new works by contemporary Chinese composers. Join the composers upstairs in Lincoln 326 after the concert for a Q&A and free coffee!

The fourth installment of the series “We.Construct.Marvels.Between.Monuments.” presents the voices of queer and trans artists challenging the patriarchal standards of museum curation and other art institutions. Includes the next installment of Chris E. Vargas’ series “Transhirstory in 99 Objects: Transvideo Store.” An absolute must for any fan of contemporary art.

Wonder Woman is a must-see action movie with great performances from Gal Gadot and Chris Pine and a refreshing feminist perspective in a blockbuster. Also,  it’s the only DCEU movie so far that doesn’t suck.

SE 25th–28th on Clinton and Division

Over a hundred vendors and multiple bands will be at the annual street this year. The parade starts at 10:45 a.m., so get there early for a good spot.

I bet you haven’t heard that name in ages. The former Dream Street member and 2005 Teen Choice Award winner is here in Portland for a night of “oh yeah I remember this song from like 10 years ago.” VIP pass holders will be in his snapchat story and get a personalized autograph.

Beyond the Cultural Revolution: The Silver River

Bright Sheng’s opera unites Chinese and Western influences in its interpretation of a 5,000-year-old Chinese folk tale of the unfulfilled love between a goddess and a mortal. Additional performance at 4 p.m. on Sunday.

This dude freestyled for over an hour on Tim Westwood a few weeks ago. Seriously. Black Thought couldn’t even do that. Be sure to see this guy before he blows up, because he’s way more legit than Lil Pump or whoever the fuck hit big this week.

A classic noir mystery plays at the Old Church. Detective Mark McPherson (Vincent Price) develops an obsession for Laura (Gene Tierney), whose murder he is investigating. Part of the Summer Film Series.

Electronic music duo perform their first ever show in Portland, at one of (IMO) our best venues. With Pleasure Curses and Leo Islo.

Voted one of the Top 10 burlesque shows in the U.S., the weekly show includes fire dancing.

Mila Turajlic’s documentary about her mother Srbijanka reflects the history of totalitarianism and political dissent in Serbia. On the, let’s say, less controversial, side of Serbian cinema, this film is a must-see for any cinephile.

The psychedelic Singer/Songwriter Sam Evian recorded much of his music on a four-track in his bedroom, and BBES draws on her queer native identity for her post-rock colonizer call-out songs.

Beyond the Cultural Revolution: Premieres and Tan Dun’s Ghost Opera

Her new book Sick, a Memoir delves into her experience as an Iranian American and her many illnesses and addictions. She will be hosting a panel discussion and selling autographed copies of the book. 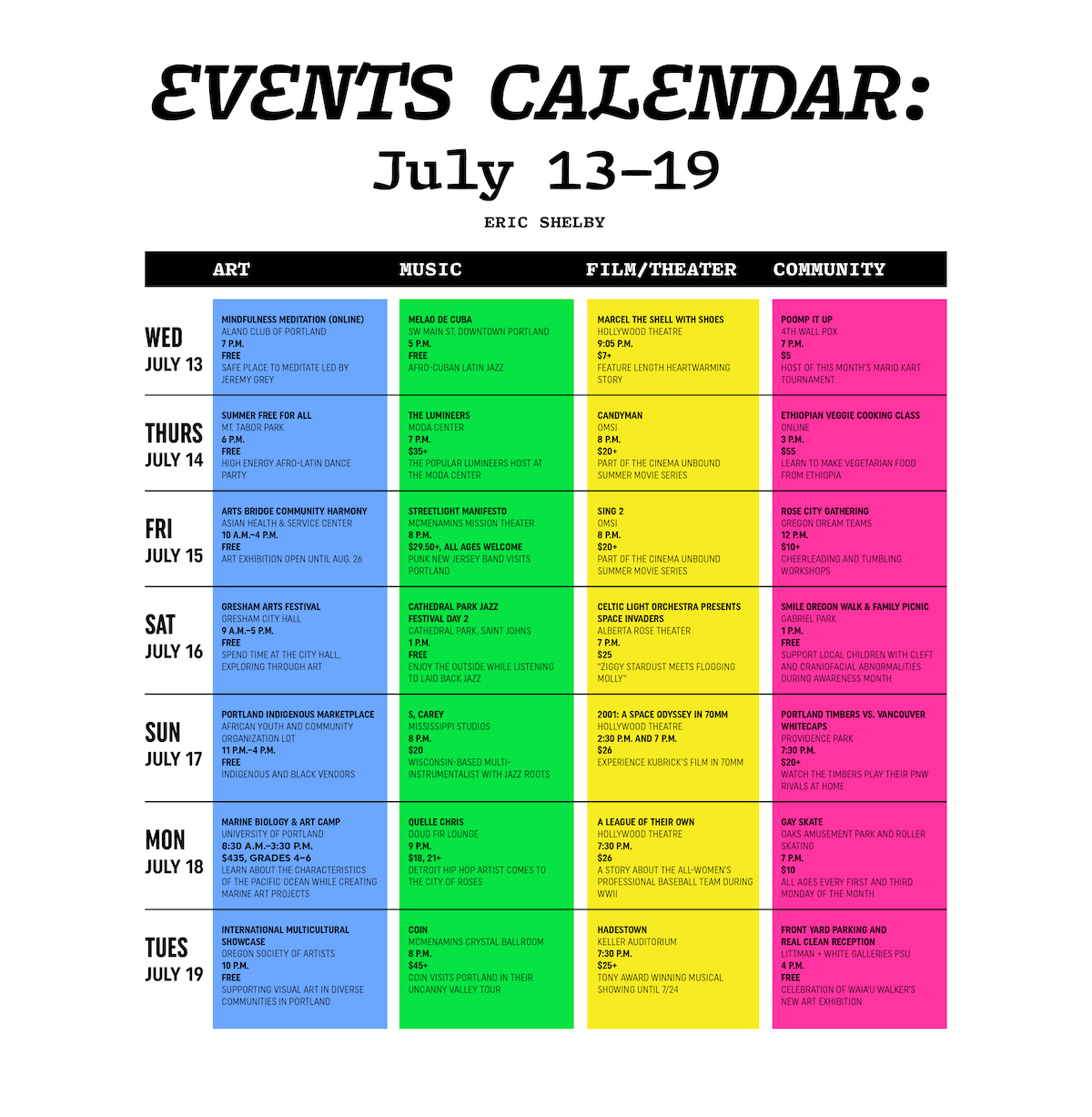