Even as a multimillion dollar budget deficit looms over Portland State, administrators are betting they can attract $60 million from the state to improve student success and debt reduction. PSU President Rahmat Shoureshi has said on multiple occasions that student success is his number one priority.

When asked how he came to this definition of student success, Shoureshi said it was “based on [his] own experience and what [he has] seen, and it was based on the discussions [he has] had with students.”

“It doesn’t mean this is the only way or meaning of that, but I have to say that there are other elements why students are here that are important in being successful,” Shoureshi added. “There is the whole issue of food and housing security, because if we have students who are food insecure or don’t have proper housing, that’s impacting their success.”

Board of Trustees and Budget Battle

At a Board of Trustees meeting on Jan. 10, Associate Vice President for Government Relations Kevin Neely presented to the Academic and Student Affairs Committee how the university plans to reduce debt through supporting student success.

When asked about the nature of the debt reduction, Neely said “an approach that might be more welcoming [to legislators] is student success.”

The key elements of student success as described by Neely were emphasizing student-centered policy requests, accelerating the time it takes for students to obtain their degrees, increasing student persistence and supporting traditionally underrepresented students. This could be through improving advising services, experiential learning, collaboration with community colleges and exploring other student assistance services.

“Those are our goals that emerged in our discussions in the trustee workgroup,” Neely said. “And they are goals that have been reinforced by the governor and the Higher Education Coordinating Committee and our discussion with [the governor]: ‘please bring me a package that achieves these goals.’”

At a Portland City Club forum on Jan. 11, the state’s top legislators gathered to discuss their priorities for the coming year.

Carl Wilson, the current Republic Senate minority leader, recently served as a member of the state’s Joint Interim Committee on Student Success, which traveled the state last year for nine months, speaking to stakeholders including children and their parents, retired teachers, current teachers, school board members and members of the public.

When asked for his definition of student success, Wilson replied, “Right now we just define it as getting a kid through school. Initially it is getting them through the system.”

The Associated Students of PSU President Luis Balderas-Villagrana believes the administration “needs to change their goals on what student success is.”

“In my experience, [student success] is students…not wondering where their next meal is going to come from and where they’re going to sleep,” Balderas-Villagrana said. “I think that’s a small part of what student success is at this university beyond other things.”

ASPSU has been working on their own ways to define student success. The Legislative Affairs Committee has worked over the academic term to collect input from students to produce a “ten point plan” describing student success.

“[The plan is] focused on student power, student success, student solidarity,” said Balderas-Villagrana. “Of course, student success is the most important thing about it. It talks about work, tuition, administration, culture, food, transportation and housing.”

This ten-point plan is intended to be included in the constitutional revisions made by ASPSU for the 2019–2020 academic year and will be up for vote during the elections process next term.

During the Winter Symposium 2019 on student success, held Feb. 28, Michele Toppe, the associate vice president of student affairs explained that using data to best serve the students is a key goal in the student success initiative.

“The latest strategic plan for Portland State for 2016 to 2020…emphasizes the importance of Student Success and…is named as the first priority in the [plan],” Toppe said.

Some of the strategies included in the plan are: improving academic success with inclusion, respect and affirmation of all students, advance student retention and preparing for academic and career success.

The average age of a student at PSU is 27, a very high percentage of students work at least one job, a quarter of students have children and from the 2017 admission data, nearly half of the students entering PSU “reported a sexual orientation other than straight,” according to Toppe.

Through the collection of this data, programs and resources are created for targeted populations. Toppe identified four of the programs, also referred to as “Retention Interventions” by Student Affairs, are the C.A.R.E. Team, University Housing and Residence Life, Services for Students with Children and the Queer Resource Center.

Rachel Webb, senior instructor in the math and statistics department, presented the use of and active and adaptive learning model as a means of increasing student success in the classroom. This included the incorporation of active learning techniques with interactive software tools, like McGraw-Hill ALEKS and Realizeit.

However, some students have said online learning programs can be problematic. Student Zoë Parker feels that these software tools are “a big experiment at the expense of the students.”

“The faculty is really out of touch with this problem,” Parker said.

She used Evia Learning, a $200 language-learning software, as an example.

“I think Evia Learning is a good idea, but the actual program is problematic,” Parker said. “The reality of it is that it’s riddled with errors, bad links and confusing/conflicting information. $200 is a ridiculous price to pay for quizlet and some extra verbal clips that you can barely understand, or advance in the modules without clearing.” 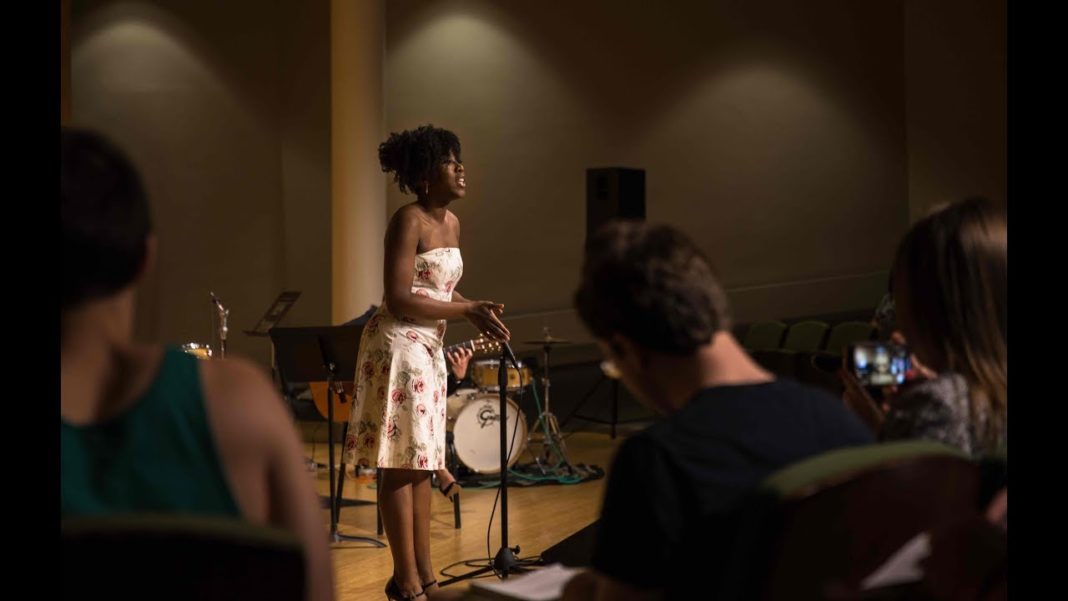