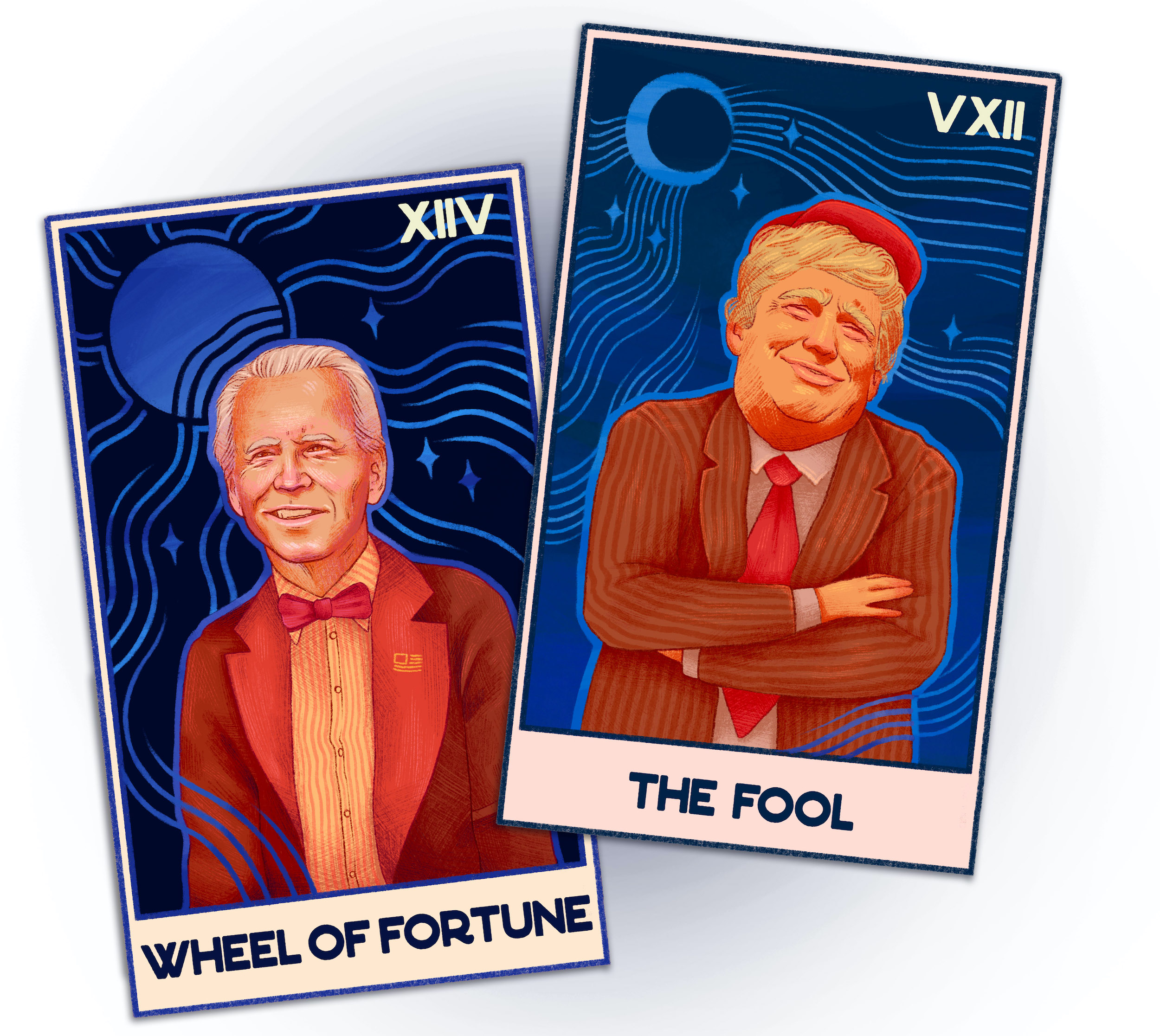 If you’re reading this on Election Day, welcome! Here at Portland State Vanguard, we generally deal with what happened more than we deal with what’s going to happen when it comes to current events, and I think that is a missed opportunity. With advances in predictive technologies and a wider variety of tarot cards, prognostication is an untapped growth market that I foresee building year over year at a dramatic pace.

Therefore, this year, we will predict what will happen in this year’s presidential election!

First, who will win? Sorry, we won’t spoil that surprise. If you’re reading this after Election Day, though, the winner was obvious, right? It was so cool when we found out who was gonna win, so yeah, looks like our prediction was correct, I promise. On the other hand, what does the future hold for both candidates? How will they govern and how will they change the country?

Shaking the dice and reading our official Vanguard augury, we can confidently predict that if Trump is leading on election night, he will rebuke any further vote counts, all litigation aimed at questioning his mandate and even mere certification by the Electoral College—who needs ‘em, folks? MAGA!

Grabbing hold of his victory, Trump will immediately call for the shuttering of multiple government agencies and sub-agencies that are not compatible with his goals (or spoils system staffing). The Food and Drug Administration? Gone, replaced by Yelp reviews. Department of Education? Consider that slate erased as Betsy DeVos moves on to a job in the private sector as a puppy mill owner. The presidency? That swamp will be drained and Trump will simply move his office over to the Department of Defense.

With a new solid majority on the Supreme Court, Trump will do the opposite of what Democrats have called for, shrinking the Court by four seats and launching Chief Justice John Roberts into the sun for his repeated line-crossing. The 5-0 right-wing majority will then find that Trump is ordained by the Constitution of the United States to be declared ‘dictator-for-life.’

As COVID-19 rages, Trump will forbid any vaccine use, becoming fully convinced that vaccines cause the terrible affliction of voting for Democrats. Instead, a national deployment of prayer teams will oversee petitions to God for healing. They can also preside over funerals—many, many funerals. A bigly number of funerals, in fact. Herd immunity will arrive eventually in the form of literal herds of various ungulates repopulating increasingly desolate cities.

Freedom of the press will vanish, so get a good, long look at this article because it’ll be going away, replaced by advertorials for delicious Washington apples and Texas beef (it’s what’s for dinner). Journalists that have written critical or satirical articles about the Trump regime will be reeducated, their skills as writers put to the best possible use in Trump’s America: rewriting schoolbooks to remove any reference to the failings of white America and the Founding Fathers.

After this year’s protests, Trump will implement a curfew that runs from sundown in cities that saw Black Lives Matter-aligned protests. No group is being targeted, this isn’t racist; why do you always accuse Trump of that, Marxist?

Finally, after COVID-19 streamlines the population of the United States, a new, downsized America will find itself leaders in a variety of well-being metrics: mansions owned, Elon Musk partnerships realized, Bill Gates political donations given. The beauty of a newly cleansed nation will make Trumpmericans realize that America was made great again, a gleaming, white city on the hill (with no poors).

The votes are tallied and then re-tallied and then court-tallied, and against all odds and suppression efforts, former Vice President Joe Biden has emerged victorious. Former President Trump will transition himself to a friendly jurisdiction, chased from the White House by his own supporters who believe that Biden moves in the day the election is certified. The blue wave realized, Biden voters will party in the streets.

President Biden’s first action in office will be to fire every Trump-appointed official and employee. Out of a cannon. Sailing toward the sun, Betsy DeVos will leave a trail of dollars in her wake, the bills fluttering down into the hands of various poor communities. Rick Perry will face the worst punishment of all: being sent back to Texas. Mnuchins will be banned, their names blotted out in a modern form of damnatio memoriae.

In response to COVID-19, Biden will mandate masks for everyone, but it will be a completely unspecified directive. Sales of novelty Trump masks will skyrocket, every other person in line at Chipotle will be wearing a plastic Superman mask and matching plastic smock. Vaccination rates will be extremely high after the government offers coupons to Supercuts with each shot, responding to the epidemic of unshorn Americans that have been working from home for too long.

Long feared by the Republicans, taxes will be raised, but only on the richest 1%, leading to a reduction in Trump’s tax rate alongside the rest of the 99%. Biden will immediately blow all the money on trains, healthcare and tuning up his IROC. Like Gerard Depardieu, wealthy Americans will attempt to flee the country to escape the tax increase, but will find their offshore money repatriated and confiscated. Like Gerard Depardieu, they will not be missed.

Facing an unfriendly Supreme Court, Biden will immediately adopt the Athenian system, nominating 500 justices through the use of drawing lots. A 300 million-slot kleroterion will be constructed to help the selection process. With 500 justices, the Supreme Court’s docket will slow to a grinding halt as clerks will be required to process, edit and print 500 different majority opinions and dissents. Cases will be heard in large public spaces such as, I dunno, a mall. Hard to say, that’s a lot of people.

Ultimately, Biden will finish out his second term attempting to referee a contentious primary between his Vice President Kamala Harris and New York Senator Alexandria Ocasio-Cortez, the latter of whom will narrowly win the nomination and go on to defeat Republican candidate, a glass of curdled milk full of nails.

Although Biden is slightly favored to win, the real winner on Election Day will be disdain for our current electoral process. Fearing a Bush v. Gore every few years, Americans will finally destroy the Electoral College. Misunderstanding the process slightly, a mob will burn down several buildings in Washington, D.C. suspected of being the actual physical college. With the specter of an election evaporated, the federal government will act on COVID-19 and provide everyone with vaccines or small American flags, depending on their trust in science.

The morning after Election Day, the next one will begin and the hellscape will be ignited anew. 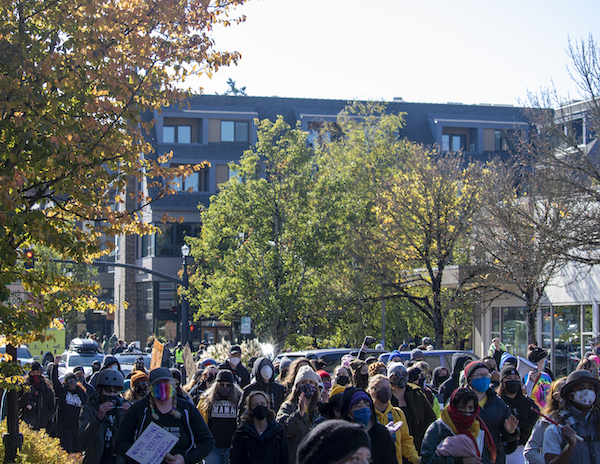