After a cancelation of the quarterly press conference with student media, scheduled for May 10, Shoureshi sent out a letter addressed to the student body. He stated the reason for his resignation as “focusing on [his] family first.”

When asked if the Board of Trustees asked Shoureshi to resign, both the BOT and PSU’s Director of Media and Public Relations Kenny Ma declined to comment. Board Chair Gale Castillo said she “did not want to answer questions in the middle of a Board meeting.”

Shoureshi will be on paid administrative leave until the December date. PSU’s Department of Communications estimated he will be paid around $880,000 over the course of 15 months, ending in August 2020.

The price of Shoureshi’s administrative leave—$880,000—is equivalent to one year’s worth of his pay. When asked about the “massive payout” on a teleconference with the media, Ma declined to comment but said “the Board feels the settlement was reasonable, and this outcome is in the best interest of both the university and the president.”

When asked if Shoureshi’s administrative leave would affect the school’s budget for 2019–20, Castillo responded that it would not. When asked where the money would be coming from, Castillo declined to comment.

On Nov. 14, 2018, Castillo stated in a letter addressed to Shoureshi that she had “serious concerns about [his] ability to be successful at PSU.”

Members of the Board were also concerned about allegations of Shoureshi harassing several employees, as well as the departure of former PSU employees Erin Flynn, Lois Davis and three female provosts in the span of two years.

The letter also addressed the Board’s concerns with Shoureshi’s past actions. In 2017, Shoureshi asked for a 4% raise “to match the faculty’s raise,” even though the faculty only received a raise of 2.5 to 3.5%.

Castillo demanded Shoureshi request his raise be lowered to 2.3%. In the letter, she noted Shoureshi was “putting [his] own financial self-interest ahead of the university’s,” “treating staff unprofessionally” and “engaging in conduct that could seriously adversely affect the university’s reputation and standing among critical stakeholders.”

According to the letter, Shoureshi was given the opportunity to resign and instead agreed to the Board’s performance plan, which included “executive coaching” and close supervision. In the six months following the institution of the performance plan, the Oregon Government Ethics Commission contacted Shoureshi and notified him of the possibility of an upcoming ethics investigation into Shoureshi’s actions at PSU.

Shoureshi said he would “cooperate fully with [the] request to uncover the facts.”

Amid both the possibility of an ethics investigation and an ongoing private investigation into Shoureshi’s actions, Shoureshi deleted over a thousand emails after becoming aware of their public records status, including flight confirmations and emails regarding the newest Board member Ben Berry.

According to a March 3 article published by The Oregonian, the BOT advised Shoureshi not to delete anything, and Shoureshi “denied doing anything wrong.”

The article also referenced a letter written by Flynn addressed to a member of the Board, claiming Shoureshi was “bullying and degrading PSU employees” after she was fired from her eight-year tenure as associate vice president a few months after Shoureshi’s arrival in 2017.

The investigation was into whether Shoureshi mistreated his employees, misled the Board or committed other transgressions concluded in April. Over the past two months, the Board has held four private executive meetings in Stoel Rives, a law firm located off campus.

The notices for the meetings on May 1 and May 5 stated the Board gathered to “hear and consider information related to complaints against a university official.”

The meetings were not open to the public, but provisions in the law allowed media to attend on the condition they would not disclose any information discussed in session. The Board could not take final actions or make any final decisions at the executive sessions.

When asked whether the Board would release the findings of the investigation into Shoureshi’s actions during his tenure at PSU, Castillo said, “Part of the agreement we reached with the former president includes the reports, so we’re not allowed to discuss the reports in public according to the agreement.”

On May 13, the BOT voted unanimously in favor of a resolution to make Stephen Percy—current dean of the College of Urban and Public Affairs—acting president until an interim president is appointed.

During the meeting, Castillo—the vice-chair of the committee that selects the university’s president—said the vice presidents spoke favorably of Percy’s appointment.

Percy stated he looks forward to “leading PSU during this transitional period as [the university sustains their] commitment to core values that include providing Oregonians with affordable and quality education.”

Percy, along with the Board of Trustees, confirmed the university would continue Shoureshi’s work and initiatives into the coming academic year.

“[Percy will] be in the position for the next several months,” Ma said.

During the Board meeting, Castillo said that a committee, headed by vice-chair Greg Hinckley,  would consider the input of faculty, staff and students in deciding the next interim president.

“The Board would receive the nominations,” Castillo said. “The governor’s interested in nominating as well.”

Castillo explained the committee would interview candidates and recommend to the full board three of those candidates, followed by a second round of interviews and a final selection made by the Board.

However, Board member Irving Levin brought up concerns with conducting a search similar to the one conducted in 2017 with Shoureshi. A national search for an interim president would take approximately a year.

Levin suggested promoting candidates from within PSU, and Castillo recommended reaching out to faculty groups for their nominations.

“Theoretically, I could just appoint someone,” Castillo said, referencing the statutes for the appointment of an interim president. “I don’t think that’s wise. I think everyone needs to be engaged.”

Wim Wiewel, PSU’s president before Shoureshi, was president of the university for nine years before resigning after the 2016–17 academic year and becoming president of Lewis and Clark College in 2017.

According to The Oregonian, Wiewel collected an annual compensation of $539,000 until he was replaced. A national search for a new president was announced, and a year later, the Board settled on Shoureshi in May 2017, who signed a five-year contract starting in August 2017.

According to Oregon Public Broadcasting, Shoureshi said shortly after that he saw the value in staying “even longer” than Wiewel did.

“The first five years are about vision and strategy,” Shoureshi said. “The second five years, you really put your heart into it together with the community to make sure that that vision not only gets executed but is successful.”

Shoureshi spent a total of 21 months in office. According to the Board, Shoureshi was originally brought on because of his skill in fundraising and fund negotiation.

“One of the [aspects] that attracted Dr. Shoureshi to us was his experience in fundraising,” said Board member Pete Nickerson. “We have a three-legged stool here at Portland State. There’s tuition, there’s state support and philanthropic giving. Our weakest link is philanthropic giving.”

According to Ma, with or without the Board’s approval of Percy, Shoureshi will “no longer have any functions or duties at the university.”

Shoureshi’s resignation is effective immediately as is his payout of administrative leave, which will begin this month. 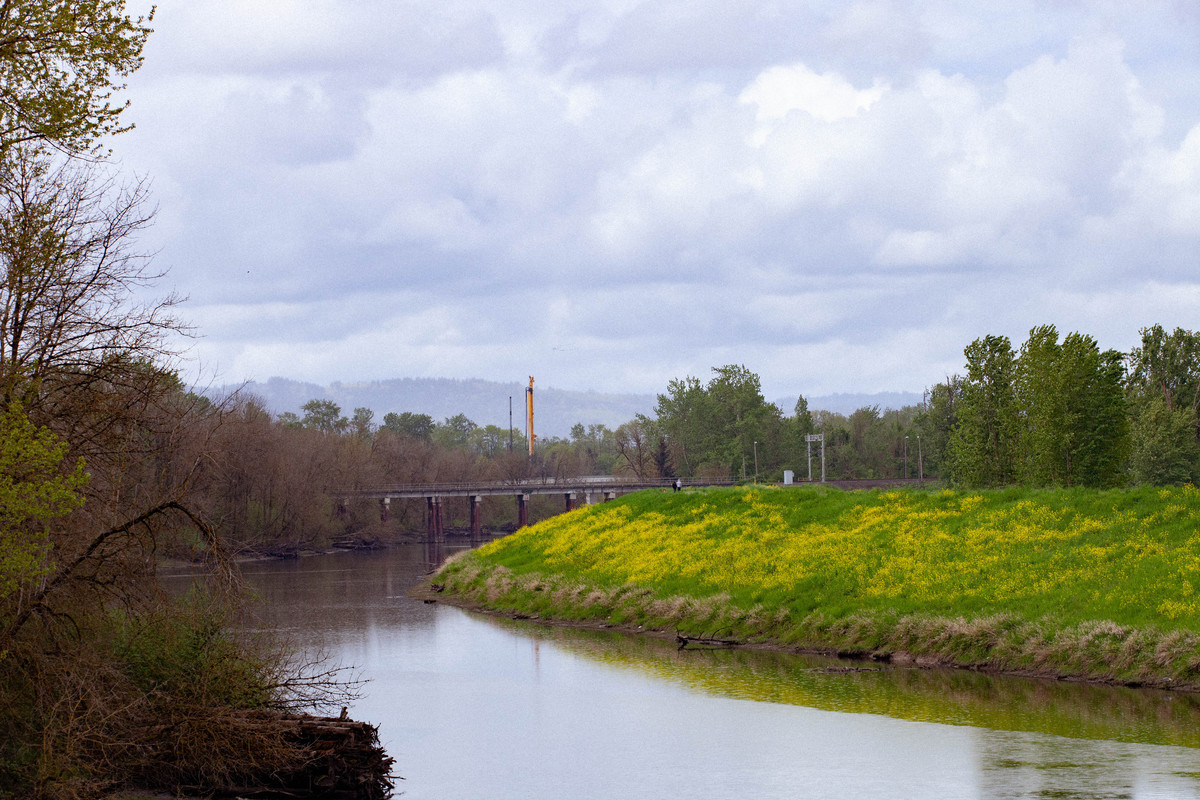 The trail ending as people walk in the distance. Camden Benesh/PSU Vanguard

Get out to Columbia Slough Trail