During a Student Media press conference on Feb. 22, Portland State President Rahmat Shoureshi announced the completion of a comprehensive campus public safety review and commented on topics ranging from an investigation by The Oregonian to accreditation and student success.

While speaking to the Faculty Senate on Feb. 4, Shoureshi announced a reporter for The Oregonian had requested a large number of public records related to his activities since becoming president of the university.

“I’m not really sure what they are looking for or what specifically they are asking,” Shoureshi said during the press conference.

A source with knowledge of the records requests said one path of inquiry involved a trip Shoureshi took with prominent Portland philanthropist and businessman Jordan Schnitzer in the summer of 2018.

Shoureshi confirmed he accompanied Schnitzer on his private jet to attend the annual, secretive gathering of powerful and wealthy men in northern California’s Bohemian Grove campground.

“I paid Jordan for the cost of that trip,” Shoureshi said, noting that the outing occured during his vacation.

Schnitzer has a long history of charitable giving at PSU, most recently donating $5 million through a family foundation to establish the Jordan Schnitzer Museum of Art on the first floor of the building located on 724 SW Harrison St., formerly known as Neuberger Hall.

Schnitzer was also involved in lobbying Shoureshi to acquire the Oregon College of Art and Craft, a deal which ultimately fell through because it was not “financially feasible.” The college recently announced it will be closing its doors in May.

“God knows what story [The Oregonian] is going to write,” Shoureshi told faculty and administrators on Feb. 4. “Most likely it will be about me and what I have done. But the key is, if we focus and do the right thing, no matter what people say, we are here to make sure our students are successful and PSU is successful.”

Shoureshi announced a March 7 special meeting of the Board of Trustees to review the recently completed review of campus public safety by external consultant Margolis Healy.

The 209-page report came about in response to the fatal shooting of Black Navy veteran Jason Washington, who was killed by Campus Public Safety Officers James Dewey and Shawn McKenzie on the morning of June 29, 2018, while attempting to break up a fight outside a bar near campus. Both officers have since accepted job offers elsewhere and departed PSU, according to the university.

In response to Washington’s death, the first fatal shooting by PSU police officers, the university also announced a separate review of the shooting to be conducted by California-based consultant OIR Group. OIR, which has provided independent reviews of fatal shootings by Portland Police Bureau officers for the last seven years, agreed to provide a report on the use of deadly force by CPSO officers James Dewey and Shawn McKenzie, along with a review of the PSU administration’s response to the incident.

That report is currently delayed, Shoureshi said, and the university does not have an estimate from OIR on when the report will be completed.

“I don’t want to say I’m surprised,” Shoureshi said. “Basically, they have been looking for the opportunity to finish some of their interviews and they have run into obstacles.”

According to the contract between OIR and the university, the total amount billed to PSU for all services related to the review is not to exceed $40,000.

Responding to the recent announcement that PSU is currently out of compliance with Northwest Commission on Colleges and Universities accreditation requirements for assessment practices, Shoureshi reaffirmed the administration’s commitment to getting back in compliance while also acknowledging the most recent warning is related to the same issues the university was cited for in 2015.

“I have to admit that both for me and for the provost, it was a surprise because neither of us knew about this,” Shoureshi said. “We are taking immediate action to make sure this issue will be resolved.”

Shoureshi also noted PSU programs with additional, stricter accreditation requirements, such as the School of Business, the College of Education and other professionally accredited programs were all in compliance.

The university will conduct a campus-wide assessment in March of whether academic programs have defined learning outcomes for students and are also assessing themselves to find areas for self-improvement.

On the subject of budget concerns over less-than-anticipated levels of state funding, Shoureshi said, “The last thing I want to do is increase or raise tuition. But we are really at the mercy of the state because we have fixed costs and we also have to satisfy our contractual obligations with faculty and staff.”

Associated Students of Portland State University members traveled to Salem on Feb. 18 to bring awareness to rising higher education costs. ASPSU President Luis Balderas Villagrana has refused to cooperate with the administration on lobbying efforts without a commitment to freeze tuition increases and work toward tuition-free education.

Vice President of Finance & Administration Kevin Reynolds will host a series of student-focused Budget Town Forums on Feb. 28, March 6 and April 4. The forums will cover the tuition-setting process and cover the overall budget of the university as a whole.

There will also be a faculty and staff focused forum on March 18.

This year’s Winter Symposium will be dedicated to student success, Shoureshi said. The event will take place from 8 a.m.–2 p.m. on Feb. 28 in the Smith Memorial Student Union ballroom. “We have an outside speaker with expertise in this area, and we’ll be formulating a number of initiatives around the whole student success activities.”

The president has previously called student success as his “top priority.”

The current definition of student success comprises four primary elements: graduating, graduating on time, graduating with no or minimal debt and ensuring students are placed in a job that serves their skills and potentials.

Shoureshi said this definition is something he put together based on his own experience and discussion with students, and that there are additional aspects contributing to student success, such as food security and housing. 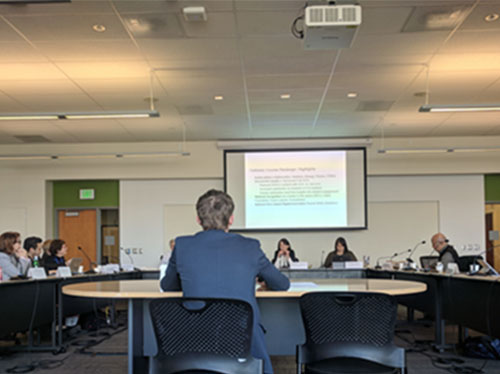