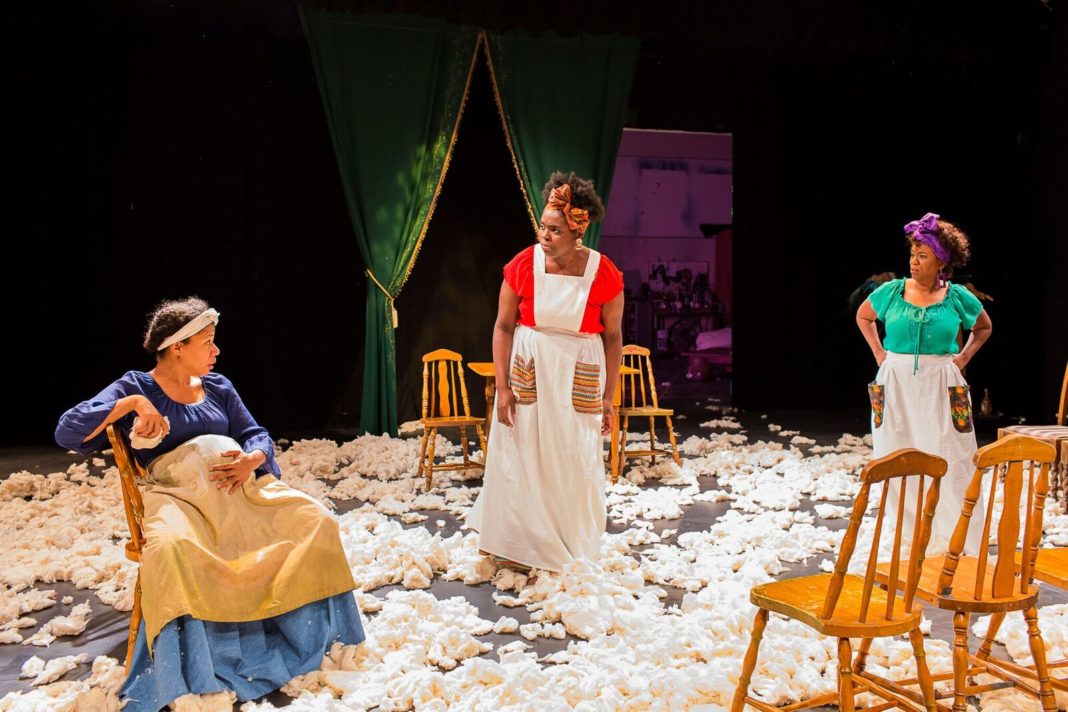 My thoughts and feelings about Artist Repertory Theater’s opening performance of An Octoroon would perhaps be best described through interpretative dance, or maybe a painting in the style of Jackson Pollock.

Everything about An Octoroon prompts a visceral response that runs the whole spectrum of emotion. The dialogue. The jarring contrast in scene changes. The use of a singular photograph. The pointedly uncomfortable jokes. The uproarious jokes. The use of blackface, redface, and whiteface. MacArthur Genius grant recipient Branden Jacobs-Jenkins’ play is not intended to be understood as a traditional story. It is meant to be felt.

Audience members will find inserts in their program explaining expectations from viewers. “This is a comedy, you are allowed to laugh audibly. You are also allowed to have audible moments of reaction and response. This can be church for some of us and testifying is allowed…Let’s go on an adventure.”

Trying to piece together the timeline and narrative of An Octoroon is asking for a headache. It exists in both the present day and the 19th century. It is meant to prompt different reactions from different audience members. The script plays with history and uses previously told stories to tell its own. The characters include BJJ (based on Jacobs-Jenkins himself), a character based on Dion Boucicault (the author of the mid-19th century play The Octoroon), and the various characters of The Octoroon.

Jacobs-Jenkins’ play follows the narrative of the original while adding in new elements that ask questions like “What is a black playwright?” and many others. Layered in amongst these questions: images, nods, and references to America’s history of slavery, racially charged media and propaganda, theater and storytelling practices. (Do you know the story of Br’er Rabbit?)

And this history—this satirization of histories—is especially important in Portland. In an interview with co-director Dámaso Rodríguez, the Vanguard asked what it means to stage An Octoroon here.

“[It] confronts race in a provocative and controversial way in a city that is known for its lack of diversity,” Rodríguez said. “It is a different equation than doing the exact same play in a city with a more diverse population. We had to confront that.”

The first week of rehearsals happened during the Charlottesville Riots, meaning a play that was already topical became even more so.

An Octoroon is emotionally charged from beginning to end, and each cast member carries the weight of those histories with them. They hold it aloft from scene to scene as if to ask: “Do you recognize this?” “What do you think?” “Do you recognize yourself here?” “Maybe we can talk about this.” “Isn’t this funny?” “Laugh with me.” “Get mad with me.”

Jacobs-Jenkins, according to Rodríguez, was writing for the American theater, which for many communities still means a white-majority audience. “It has to be a play for a white audience along with a mixed and diverse audience,” Rodríguez said. “As an African American playwright, he also knows that he is speaking directly to fellow African Americans in the audience.”

To put on An Octoroon in Portland at this moment in time requires reflection. “More effort to create a safe space to understand why we’re doing this show,” Rodriguez said. “We are relatively inexperienced as a city in our conversations about race.” Staff and actors spent time in anti-racism training and reviewing the history of racism in Oregon.

The Octoroon premiered in 1859—Oregon’s founding year, the same time Oregon’s racial exclusion laws were in effect. ART’s production of An Octoroon is a chance to reflect on that history.

Rodríguez said, “If we do this work, looking inward while looking at this play, [it’s a] key step towards engaging in this community.”

And in the current climate, that is something we all need to be doing, especially if we have the privilege to disengage.

“He uses the vehicle of comedy and visual poetry to explore race,” Rodríguez said. It’s hard to put it into better words than that.

Attending An Octoroon requires an open mind about your definitions of theater and what you typically come to expect from a stage performance. “In the same way that you might look at a painting and not understand everything in it but understand what the artist is trying to articulate,” Rodríguez said.

That’s what ART’s production of An Octoroon is. It’s a feeling. It’s a visceral response. It’s electrifying in what it chooses to present to its audience. It’s about questions without clear answers.